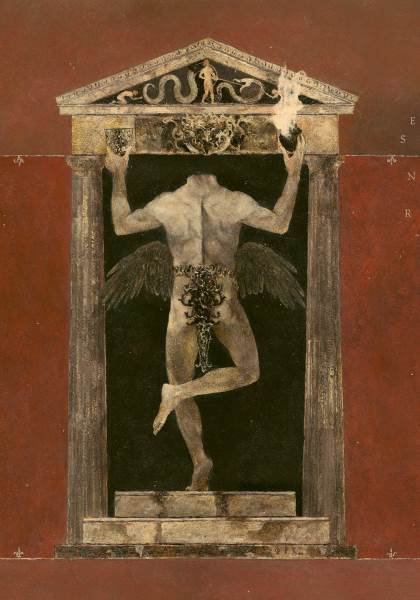 Few would have blamed Polish musical extremists BEHEMOTH for calling it a day and hanging up their armor and corpse paint in 2010 when mainman Adam"Nergal"Darski was diagnosed with a severe case of leukemia. Nergal conquered the life-threatening illness with a treatment plan that involved a bone marrow transplant procedure. These well-publicized details are worth remembering considering that people universally question and/or examine their outlooks upon religion, spirituality and other big picture issues when faced with death. Nergal didn't turn his back on his less-than-conventional beliefs at all. He gripped his satanic convictions even tighter, in fact.

His resilience and convictions took shape on 2014's "The Satanist", an effort that has been heralded by critics and fans alike. It is arguably the act's best album to date. Arriving in time to moisten the parched mouths of eager BEHEMOTH diehards awaiting their next album, tentatively slated for late 2018, the Polish band has released the double-concert live album and DVD titled "Messe Noire". The stopgap release includes two shows from 2016 when the group performed "The Satanist" from front to back—one show on its home turf in Warsaw, Poland, another at the Brutal Assault festival in the Czech Republic—in addition to a cinematic archive featuring all official videos associated with the album.

BEHEMOTH is exceptionally theatrical. Stunning multimedia snippets that were used to visually argument the band's performances for this touring cycle are found on the DVD. These images are layered atop the performance footage as an added touch rather than as an overpowering display or focus. And, of course, BEHEMOTH has earned its reputation not simply because of the group's impressive visual aesthetic and cinematic appeal, but for what matters most: Its hellish music.

"Messe Noire" reflects BEHEMOTH's over-the-top expression that offers the kind of satisfaction one might derive from watching a good atmospheric horror film, especially since the performances are replete with eerie, mysterious ambient sounds. Ringleader Nergal appears like a demonic, hooded druid set to summon some kind of otherworldly spirit. Does one suspend their state of disbelief, or is there a collective banding of energy?

Whatever the case, "Blow Your Trumpets Gabriel" sets the stage as though the performance was actually a mysterious ritual with the backdrop of heavy metal cacophony providing the soundtrack. The catchy songs from "The Satanist" are heavy handed and oozing with enough evil that will attack metal fans from the underground and beyond. In terms of presentation and cinematography, the release is as high caliber as the source material. On all fronts, "Messe Noire" is a professional representation of a professional band firing on all cylinders, and it's a testament to Nergal's inspiring tenacity.