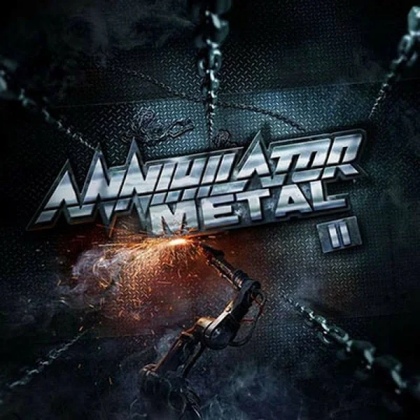 At best, familiarity breeds indifference, which may be why ANNIHILATOR remain such a perennially underrated force for metallic good. Guitarist and founder Jeff Waters has made a virtue of sticking to his own, ferociously focused script, and while the Canadians have traversed plenty of diverse territory over the decades, it's albums like 2007's all-star cameo-fest "Metal" that most accurately sum up their wildly entertaining blend of utmost precision and giant, grin-inducing metal tunes. Given the opportunity to re-work one of his less celebrated records, Waters has turned it into an even bigger and more explosive celebration of the ANNIHILATOR sound. All the original guest soloists and vocalists remain intact, but this is more than just a cautiously tweaked upgrade. Instead, legendary engineer Mike Fraser (AC/DC, VAN HALEN and many more) has deftly blended the old album's key components with brand new drum tracks provided by former SLAYER legend Dave Lombardo, and a whole set of reworked vocals by INTO ETERNITY's Stu Block (who, considering how the ICED EARTH story panned out, arguably deserves a decent break at this point). Combine all that with a heavier and more organic sound and "Metal II" more than justifies its second crack at the whip.

The highlights are the same as before, but with added emotional oomph. In particular, Alexi Laiho's guitar explodes on both "Downright Dominate" and a blistering cover of VAN HALEN's "Romeo Delight": both exhilarating and poignant. The ageless Dan Beehler shreds his larynx over Waters's balls-out take on EXCITER's "Heavy Metal Maniac" — it's just like 1985 all over again. Elsewhere, "Haunted" is an obnoxiously turbocharged thrash rager, with a magnificent lead break from Jesper Strömblad (THE HALO EFFECT/ex-IN FLAMES),and "Couple Suicide" brings ARCH ENEMY icon Angela Gossow together with Toronto's high priest of huge rock DANKO JONES, with predictably raucous and intense results. Best of the lot, "Kicked" dares to dig a little deeper into ANNIHILATOR's sonic arsenal, with a woozy, alt-metal intro and some of the gnarliest, spikiest riffs on the whole record. Throughout it all, Block wails, shrieks and growls as if these songs were always intended for his eccentric talents.

With rumblings of a huge ANNIHILATOR reissue campaign growing louder, "Metal II" feels like an excellent entry point for diehard fans and newcomers. The title tells you what to expect. The album delivers. Your neck is going to hurt.