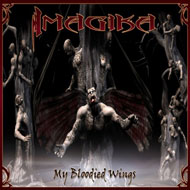 After languishing in import and tribute-album hell for years, the time finally seems right for California's IMAGIKA to make a dent in their home country. Their fierce, aggressive take on traditional melodic metal is potent, full of dramatic flourishes and virtuoso star turns that should have the prog/power set eating out of their hands.

"My Bloodied Wings", their fifth album, may have the vocals cranked up in the mix, but it's a guitar freak's wet dream. The riffs here are inventive and unique, and the soloing is impeccable, creating an epic feel despite a rather short average song length. The band employs plenty of gritty rhythms and heavy, thrashy parts, adding a tough and progressive slant to their classic metal foundation. Check out the manic "Inhuman" if you have any doubts as to the band's intensity — frenzied riffs, crashing drums and blistering solos that'll scorch paint. This is a uniquely American strain of power metal, with a toughness and heft that sets the band apart – combining the grandeur and true-metal muscle of ICED EARTH with some of NEVERMORE's aggression and dark sense of theater.

There's a double-edged sword in the mix here, though, and his name is Norman Skinner. The vocalist has charisma and character to spare, and he attacks the material here with gusto. But he's also frighteningly off-key in places, and his high screams are hit-or-miss at best. It sucks to single out one member of the band like this, but if we're being totally honest here, he's the one element holding "My Bloodied Wings" back from being truly world-class. At the same time, though, his acquired-taste of a vocal will be what sets the band apart for a lot of people. Ultimately, it all comes down to individual taste – and while it's easy to question some of his overreaching phrasing choices, it's also nice to hear someone these days who doesn't sound like 72 tracks of glossy, auto-tuned perfection.

One thing Skinner does bring to the table is a dynamic "cast of characters," so to speak. He utilizes a near-death-metal growl at times to get the point across sometimes, and on many occasions he's singing a second, harsher track to back up his more melodic voice. And it's not like he can't sing – when he takes on the most ballad-like track, "One More Day", he delivers his lines in a theatrical, Tate-like croon that's tasteful and enjoyable. When he's able to mesh his unique style a little more fluidly with the guitars, these guys will be cranking out classics.

"My Bloodied Wings" is not without quirks and flaws, but overall it's a strong, solid effort from an experienced band ready to increase its profile. I'd say they're about one album away from standing next to ICED EARTH, SYMPHONY X, and NEVERMORE as paragons of American heavy metal. IMAGIKA are a work in progress, but already pretty awesome, and worth the support of any fan of heavy prog/power metal.