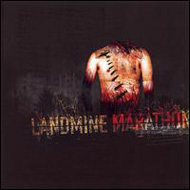 From the first mammoth riffs of album-opener "25th Hour", the first band that immediately comes to mind is the mighty BOLT THROWER. And when it kicks into high gear, something tells you that "Wounded" from Phoenix's LANDMINE MARATHON is going to be an album that does nothing short of ripping you a new fecal discharge unit. Even with a standout chorus, the momentum never wanes and the song ends up being just one of several rippers on this 23-minute release.

Grace Perry's caustic vocals, at times moving into a lower growl, lead the land, air, and sea assault, her presence always in your face and violent as hell. On the whole, the tunes take the pummeling delivery of the above mentioned British warmongers and mix in a vicious crust punk edge. Consider an early '90s death metal approach and add a seriously nerve wracking attack. Covered with a thick crust and the smell of burning bodies, any of these tracks are guaranteed to stomp out your guts, as the members walk away in maniacal laughter. "Crisscross Thoughts", "Time Movement", and "Dying Days" skillfully blend up-tempo insanity with mid-tempo crush in a way that feels loose without being sloppy. If it's not "Muscles Crown" rolling over the battlefield dead like a tank division, it's the 44-second shotgun blast to the face that is "White Widows" ensuring that you get off your ass and break something…anything. Clocking in at less than two minutes each, "FUBAR" continues the same mid-tempo to up-tempo madness, while "Introduction" serves as a doomy instrumental march. The furious "Time Movement" then completes the deadly mission.

Bands like LANDMINE MARATHON are necessary to disabuse everyone of the notion that old school values and a filthy delivery have taken a back seat to mall rat metal. Keep a towel nearby to wipe up the blood.