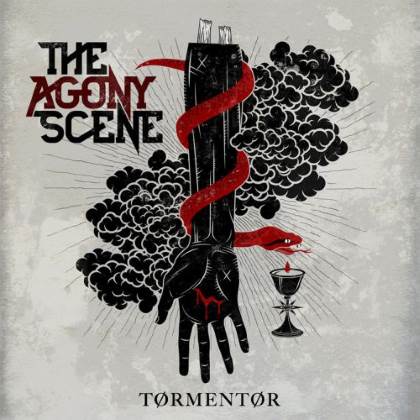 In the mid 2000s, one of the most respected bands in the metal underground was Tulsa's THE AGONY SCENE. Though it bounced from Solid State Records to Roadrunner to Century Media within a four-year span, THE AGONY SCENE was widely considered one of the top quality dark metalcore bands around. Its momentary breakup in 2008 was a crying shame for a band that had the best of aggression, force and groove going for it.

The central corps of Mike Williams, Chris Emmons and Brian Hodges remains along with current bassist Jay White, with ten other members having bounced in and out of THE AGONY SCENE over the years. If that's not in-and-out drummer Brent Masters doing a session appearance on this album, then his reported replacement Ryan Folden, who played in the band previously from 2007 to 2008, is a damned good facsimile. His blazing performances foster the onslaught spurring THE AGONY SCENE's triumphantly noisome first album in 11 years, "Tormentor".

"Tormentor" is far heavier and even more relentless than THE AGONY SCENE's first run. Instead of calling this band dark metalcore, this scorching stuff is closer in the vein of KEEP OF KALESSIN. This spike in brutality gives long-awaiting fans a nasty treat.

The album opens with "Hand of the Divine", a ferocious song about the 2003 Rubio murders in which John Allen Rubio and his common-law wife, Angela Camacho, slaughtered their three children, believing them to be demons. Maudlin stuff to portray in song, andTHE AGONY SCENE whips up an impressive urgency, particularly on the thrash and grind modes. Mike Williams's screeching is more savage than ever while Chris Emmons and Brian Hodges's outpouring of shred are equally rambunctious.

The intensity doesn't settle as "Like the Weeds in the Field" continues the assault, and the guitar patterns Emmons and Hodges wield are not merely darker, they're conjured straight out of black metal. "Serpent's Tongue" and "Mechanical Breath" inhale the wisps from some bleak, kindred forest in Scandinavia, and in the case of the latter, returns a head-crashing, violent rhythm.

The only thing moving faster than the tempos, guitars and bass on this album is the album itself, which reaches the rails-teetering hell ride of final track, "The Apostate", faster than you expect. If you want sick fast, be listening for a wicked bass and guitar note chase prior to "The Apostate"'s final verse.

"The Darkest Red" showed THE AGONY SCENE could swing as well as slam in 2005, while "Get Damned" dirtied up the band's brazen harmonies. On "Tormentor", THE AGONY SCENE doesn't concern itself with what to bring forward from its past, save for maybe the driving snare rhythms that gave "The Darkest Red" a monster kick. "Tormentor" is not merely the vibe of a band revived and reinvented. THE AGONY SCENE tapped into something butt ugly here and had the wherewithal to run with it. This is a tremendously heavy album from a metal band we're more than happy to have back.