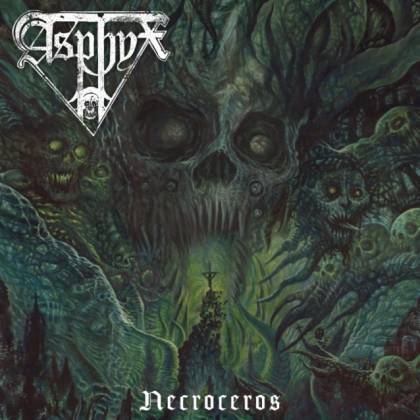 As old school and gnarly as it gets, ASPHYX have been flying the flag for making death metal properly for more than 30 years. Okay, so the current lineup is almost entirely different from the one that released "The Rack" (an immortal classic, fact fans!) in 1991, but current guitarist Paul Baayens has already proved himself to be more than equal to the task of conjuring riffs in the Dutch band's grand, grotesque tradition. Even more so than on 2016's "Incoming Death", ASPHYX sound newly enthused and more lost in their own warped world of multi-tempo viscera than ever.

Sounding even more raw and barbaric than they did on 2009's flawless comeback opus "Death… The Brutal Way", ASPHYX adhere rigidly to an old-school template, but their sound remains entirely their own. "Necroceros" brings certain new elements to the table, and it's undeniable that the band have never been as overtly melodic as they are at several points here. But from raging opener "The Sole Cure is Death" onwards, the tenth ASPHYX full-length violently hits the same grim and viscous sweet spot that made all those previous triumphs so irresistible and addictive. The presence of Martin van Drunen, one of death metal's most iconic vocalists, only adds to the riveting authenticity of the whole, bruising enterprise, as the band he almost single-handedly kept alive spews out some of their finest material yet.

As ever, it's the slower songs that exert the most power. The fervently tuneful "Mount Skull" and the opulent and morbid "Three Years of Famine" are as monumental as anything in ASPHYX's catalogue, blurring the lines between death and doom with the band's customary mastery. For those craving a fix of flat-out violence, the defiantly goofy "Botox Implosion" is truly ferocious and primitive, as van Drunen roars and spits about hideous plastic surgery disasters over another bubbling torrent of prime Baayens sludge and heads-down hardcore punk. In a similar vein, "Knights Templar Stand" is almost trad metal in spirit, exuding a catchiness that might take a few old-school purists by surprise, albeit in the most admirable, death-to-the-bone way conceivable. Elsewhere, "In Blazing Oceans" takes an epic, slow-motion dive into dark, watery depths, while "Yield or Die" feels like the missing link between BLACK SABBATH and BOLT THROWER: an inspired and memorable death metal call-to-arms.

As ever, ASPHYX save the final descent into hell's oily swamp until the last. "Necroceros" slithers in on a hissing sea of overdriven bass, van Drunen's primeval rasp belching out a somewhat ludicrous tale of a voracious, planet-munching colossus over several of the finest riffs ever to grace an ASPHYX album. This is the real death/doom crossover, ladies and gentlemen, where the muscle and spite of the former collide with the oppressive atmospheres of the latter; as sludgy, snail's pace riffing and sledgehammer grooves battle it out in a sick and horrifying fight to the (sticky) end. That "Necroceros" is a really great album will come as no surprise to ASPHYX fans, of course. It's just what they do. More melodic? Perhaps. But still the most flagrantly crushing show in town.