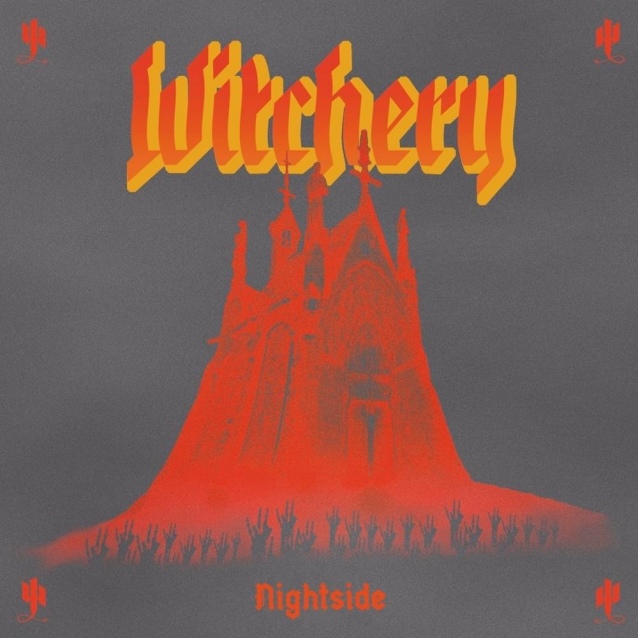 First emerging at a time when evil thrash metal was in short supply, WITCHERY were always an unforgettable blast of fresh / foul air. 25 years and a handful of great albums later, guitarists Jensen and Rickard Rimfält appear to have lost none of their enthusiasm for digging up the dead. The Swedes' first concept album, "Nightside" delves into the always resonant world of witchcraft, oppressive religious regimes and bloody, blasphemous revenge, while also delivering the expected musical clawhammer blow to the cranium. Inspired by the narrative's evocative possibilities, chief songwriter Jensen has made the most of lockdown isolation and has written a diverse and dastardly collection of songs that hang together with the eerie grace of a swinging corpse. Sonically nasty but exerting some serious low-end weight, the production is near perfect, and renders WITCHERY in the ghoulish, monochrome colors that this unusually ambitious set seems to demand. All things considered, "Nightside" is a solid contender for this band's finest record yet.

Immersed in the macabre world of Witchfinders and the women they gleefully torched, every one of these songs ticks at least one classic WITCHERY box, but the depth of atmosphere and sheer breadth of musical ideas far exceeds any previous album. In truth, diversity and nuance were never the point of albums like "Restless & Dead" (1998) and "Dead, Hot and Ready" (1999),  but "Nightside" strikes a clever balance between riffing people's terrified faces off and embracing the dramatic possibilities of a more dynamic approach.

Diehard fans need not worry about a lack of flat-out thrash face-flayers. "Nightside" is full of them, and they are uniformly heavier than past equivalents. "Witching Hour", "Popecrusher" and "Churchburner" are all indecently exciting and delivered with psychopathic levels of aggression; "A Forest of Burning Coffins" (featuring CARCASS frontman Jeff Walker) is even more deranged: a runaway hell-train, stuffed to the brim with explosives. In contrast, grim-faced psychodramas like "Storm of the Unborn", "Left Hand March" and the closing title track employ a greater range of tempos and textures, often veering into blackened realms and providing a high-definition backdrop for vocalist Angus Norder to spit and howl across.

What matters most is whether this all works as an immersive, front-to-back experience. At a time when attention spans are at an all-time low, concept albums are a potentially risky business, but WITCHERY's spikiness, attitude and undeniable mastery of metal's dark depths have held firm. "Nightside" may not be the greatest story ever told, but it's definitely one of the heaviest. Have nightmares.