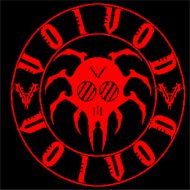 Based on advance hype, one might think that the new, self-titled album from Canadian metal vets VOIVOD (their tenth studio effort) is a epoch-making metallic masterpiece that harkens back to the chaotic, thrashing, apocalyptic strains of early releases like "Killing Technology" and "Dimension: Hatross". Well, not quite. Instead, "Voivod" picks up almost exactly where 1993's "The Outer Limits" left off, with the return of original vocalist Denis "Snake" Belanger, who departed shortly after the band's '93 tour. It is a crisply produced hard rock album, spiced with frequent heavier moments, the always interesting sci-fi concepts, and the progressive leanings that have long been a trademark of this long-respected quartet.

"The Outer Limits" found the band bringing a somewhat more mainstream groove to their progressive thrash sound, making it one of their most accessible efforts. "Voivod" has many such flashes of the same accessibility, yet is also ultimately held back by the same limitations that VOIVOD has always faced: the inherent shortcomings of Belanger's voice, combined with a lack of sparkling, memorable songwriting. Yet it is these same attributes that, in their weird way, distinguish VOIVOD from countless other heavy rock acts.

Belanger's replacement, bassist/vocalist Eric Forrest, brought a more conventional metal style to the two albums he recorded with the band, "Negatron" and "Phobos", dissipating much of the group's identity. Belanger's voice is an acquired taste, at worst whiny and at best a convincing snarl, but he also captures an otherworldly, eccentric quality that is unmistakably that of VOIVOD. Yet his range is limited, forcing the band to stay in one musical area and eventually bringing a certain monotony to the proceedings.

The real star of this album is guitarist Denis "Piggy" D'Amour, an underrated axeman who consistently turns out catchy and creative riffs and leads without sounding too flashy. The musicianship across the board is impeccable, from Piggy's inventive work to Michel "Away" Langevin's solid percussion to the tight accompaniment by new bassist "Jasonic".

Of course, "Jasonic" is ex-METALLICA bass player Jason Newsted, whose involvement with the project has fired up much of the hype and anticipation. Wisely and fairly, Newsted stays in the background, making up one half of a very powerful rhythm section and complementing the band's sound without causing any unnecessary musical distractions.

If all these ingredients — Newsted's arrival, D'Amour's excellent guitarwork, the return of Belanger — yielded some truly electrifying tunes, "Voivod" would be a memorable album indeed. Make no mistake, there's a number of pounding rockers like "Rebel Robot" and the anthemic "We Carry On", as well as more complex, classic VOIVOD prog-rock experiments like "The Multiverse" and "Les Cigares Volants". The band has also stayed true to themselves and retains a sound all their own, no mean feat in this age of endless corporate rock/metal clones. Yet "Voivod" the album never really blasts off, keeping these space-metal pioneers in a predictable — if enjoyable — orbit.