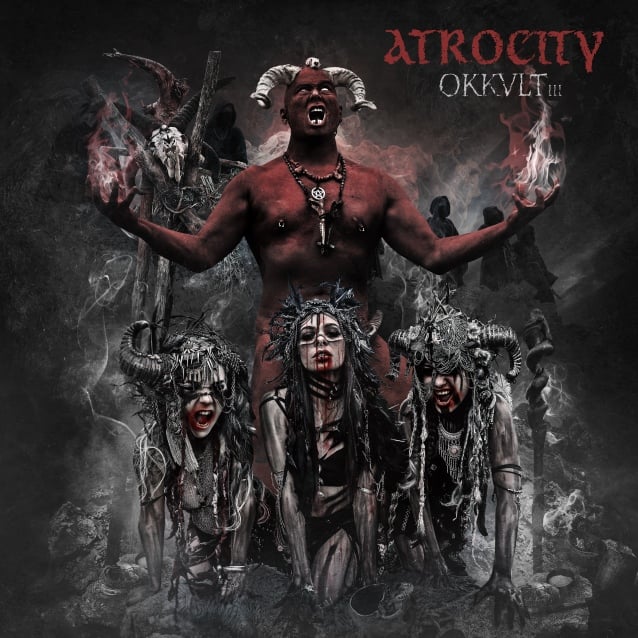 Leading lights of the German death metal scene since the early '90s, ATROCITY have taken a uniquely wayward path from primitive past to stark, brutal future. Along the way, Alexander Krull's enduring crew have veered off in numerous unexpected directions, embracing everything from vicious hardcore to deep-dive gothic rock, and generally refusing to play the tunnel-vision repetition game.

Arguably still best known for 1992's dark death masterpiece "Todessehnsucht", ATROCITY have spent the last few years reinvestigating their deathly roots, as showcased on 2013's "Okkult" and its 2018 follow-up, "Okkult II". The completion of a trilogy that has effectively returned the band to the forefront of modern DM, "Okkult III" aims to solidify the band's reputation once and for all.

As with most of the records ATROCITY have made over the decades, "Okkult III" arrives enshrouded in an opulent, anti-religious aesthetic. Beneath the ghoulish, bloody façade, however, this is a thrillingly straight-ahead death metal album in the truest old-school tradition. A song like "Fire Ignites" exemplifies the Germans' ongoing mixture of evolution and atavistic fervour: with shades of MORBID ANGEL and VADER, this is technical death metal with the emphasis on the metal part; predicated on a combination of hulking, precise grooves and lightly worn virtuosity, Kruller's abyssal growl has a perfectly brutal and bombastic backdrop to scorch across. Likewise, "Born To Kill" resounds with old-school catchiness, but ATROCITY never lose the festering stench of Hell, and every riff drips with blasphemous intent. Both "Bleeding For Blasphemy" and "Priest Of Plague" maintain those same standards of grim intensity, before "Malicious Sukkubus" squirms menacingly into view, with guest vocals from Elina Siirala (LEAVES' EYES — Krull's enduring symphonic heavyweights) and Zoë Marie Federoff (CRADLE OF FILTH) bringing ATROCITY's symphonic tendencies to the fore over a blackened mid-paced stomp. Even more adventurous is the closing "Teufelsmarsch", which makes some subtle, backwards nods to the Germans' goth/industrial phase, while conjuring plenty of mid-'90s vibes with pristine blasts and some of the nastiest riffs this side of the last BELPHEGOR album.

Bolstered by the inclusion of the entire album in instrumental form, "Okkult III" never quite hits the heights of the original "Okkult", but as the concluding part of a decade-long return to blistering top form, ATROCITY's latest salute to the darkness hits all the right marks with real venom and plenty of class.