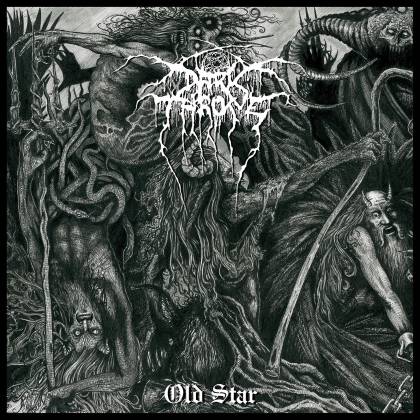 The progression of extreme metal legends DARKTHRONE from black metal genre pioneer to ambassadors of pure heavy metal expression has been fun to experience. While some of their contemporaries continue to put out competent-yet-watered-down rehashes of works that defined the genre and others self-destructed under the weight of their own psychological excesses, Fenriz and Nocturno Culto quietly continue to get together every few years, plug in, and crank out musical statements awash with heavy metal revelry that cement their status as masters of the genre, aging gracefully.

There are no diatribes on the state of the extreme metal scene. There are no overly verbose manifestos decrying the lack of danger in modern heavy metal. There are no self-aggrandizing ego trips bordering on oblivious self-parody. Devin Townsend screamed that "The time has come to forget all the bullshit and rock!" in the chorus of "Liberation", the opening track of his 2012 record, "Epicloud". That's exactly what happens when a new DARKTHRONE record comes out in the modern era of the band, and the duo's latest record, "Old Star", continues that mission.

Their latest barrage hits the ground running with album opener, "I Muffle Your Inner Choir". The riffs come immediately – there are no mood-setting intros to be found here — and lock into a consistent and catchy fast-paced thrash for most of the next six minutes, with Fenriz's drums beating down with a mechanical torrent and a warm snap. Nocturno Culto's vocal rasps and work on bass and guitars reinforce the duo's modern vibe as a black metal-infused take on MOTÖRHEAD. "The Hardship of the Scots" and the title track are mid-tempo rockers with scuzzy blackened edges. Nocturno Culto's most discordant guitar solos are found on this stretch of the record, with the title track especially having some aurally ominous builds throughout its length to match his snarling vocal performance.

"Alp Man" is a stomper full of more ominous riffs that one could easily picture Thomas Gabriel Fischer delivering his epic grunts over, but what follows is the most overtly black metal sequence of the record. The first half of "Duke of Gloat" is a speed-propelled ripper that takes a turn into a moodier set of metallic indulgences, with another harsh squealing guitar solo underpinning the second half. The album culminates with "The Key is Inside the Wall", a closing call which initially starts out as a slow-paced crawler. This serves as a fake-out though. Quickly the track becomes the most purely metallic rocker of the record, before spending the final moments of the album veering back-and-forth between that fist-pumping rally and a slow stomp that would surely result in a very bloody mosh-pit should DARKTHRONE ever endeavor to perform live again.

Fenriz remains a vocal champion of pure heavy metal expression. It's only natural that instead of revisiting and recycling the group's previous genre-defining high points new DARKTHRONE material instead celebrates all that is great about heavy metal in a tightly wrapped presentation that is one hundred percent metal, zero percent bullshit. "Old Star" continues the band's streak of avoiding the external histrionics surrounding modern extreme metal, allowing for pure immersion in the power of the riff.