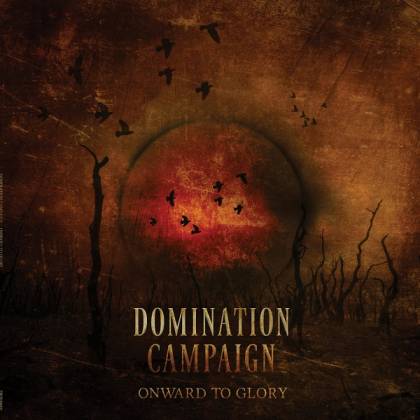 If your day job tends to favor the more-is-more approach, days off are probably best spent taking it easy. Not that PSYCROPTIC frontman Jason Peppiatt has taken the foot of the accelerator for one second with DOMINATION CAMPAIGN, his new project and a(nother) collaboration with PSYCROPTIC guitarist Joe Haley, here playing drums. We are still firmly in death metal territory, but while the better-known Tasmanian extremists are renowned for their technical dexterity, complex arrangements and bewildering feats of brutal derring-do, DOMINATION CAMPAIN is proudly and unapologetically tethered to the old-school flagpole, with all the mid-tempo nastiness and simple, scything hooks that informed the genre's early '90s heyday. As an added bonus, this is a strictly war-obsessed affair, replete with the sound of machine-gun fire, most notably on opener "Death Before Dishonour": an absolute gem that gruffly establishes Peppiatt's manifesto via hammering, BOLT THROWER-esque riffing and deft detours into sledgehammer grooves.

The remaining seven tracks adhere rigidly to the same principle of delivering maximum punch with the minimum of fuss. With such a bruising, maxed-out production, there are occasional glimmers of something more polished and contemporary here, but songs like "Onward To Glory" and "The Sniper's Gaze" are so direct that the spirit of the old school is omnipresent and unmistakable. When DOMINATION CAMPAIGN make a brief but convincing detour into slithering, blackened doom at the start of the genuinely startling "Terror From Above", it suits the record's grim, war-torn aesthetic to a shrapnel-blitzed tee. Similarly, a grand finale of "The Domination Campaign" lurches from neck-snapping riff worship to a murderous onslaught of blastbeats and BENEDICTION-style grind.

Above all else, "Onward To Glory" is Peppiatt's vehicle, and he rides it over the bloody landscapes with the maniacal stamina of a true militant. In particular, his vocals have a scabrous, declamatory tone that would be denied suitable space on a PSYCROPTIC record. Here, he sounds absolutely deranged and hell-bent on ruining everyone's day. Everyone, that is, except fans of gung-ho, grotesque and pretty fucking great death metal.