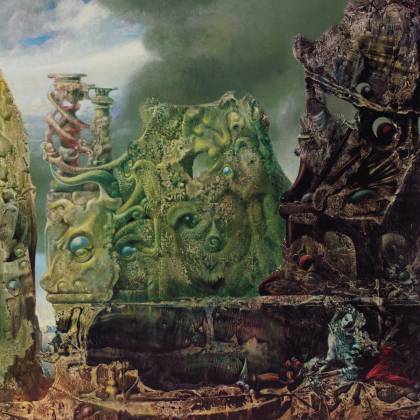 It is very easy to appreciate the bands that write about fantastical elements derived from fantasy and sci-fi inspirations, and match the grandeur of those inspirations with an equally over-the-top musical presentation. There are a number of bands though that are capable of luring you into their odes to bewitching enchantresses and magical wizards via a more subdued rock sound. The third record from Vancouver rockers SPELL, titled "Opulent Decay", doesn't quite break into the upper tier of modern bands purveying traditional hard rock sounds. There is still plenty of rock warmth contained within though to warrant plenty of spins.

While there are moments of hard-driving riffage contained within their latest record — most notably on the title track — the pace contained on "Opulent Decay" is a bit more leisurely. It is those moments though where SPELL truly shines brightest. "Psychic Death" opens the record with a vibe similar to other modern bands also channeling the "(Don't Fear) The Reaper" end of the BLUE ÖYSTER CULT songbook. One of the great uniters of the modern wave of Canadian bands indulging in more traditional heavy metal sounds is a flair for production that sounds as warm as the vintage records that established the blueprints. SPELL tailors their songwriting to the strength of that production, capably replicated here by engineer/producer Felix Fung.

The band's efforts to generate a warm sound on "Opulent Decay" is aided by an extra emphasis on galloping bass lines throughout the record. While guitarist Graham McVie is given plenty of moments to display some flashy guitar solos — including the most purely metal moment of the record in the second half of "Deceiver" — the trio tips their hat to IRON MAIDEN by building the majority of their songs around galloping catchy bass lines from bassist/vocalist Cam Mesmer. Whether it's the swinging proto-NWOBHM rock displayed on "Sibyl Vane" or the brooding mid-tempo slog of "The Iron Wind", Mesmer's bass lines remain engrossing through every turn in direction the band takes.

Unfortunately, as strong as Mesmer's performance on his instrument of choice is, SPELL is limited from breaking into the upper tier by his relatively flat vocal performance. The songs where the band aims for a stronger injection of metallic power are hampered by his monotone nasal shouts. That is another reason why the group's more subdued songs are their strongest. Mesmer's vocals are better suited to the fantasy rock balladry of "Dawn Wanderer" and the goth vibes of "Imprisoned By Shadows" than the group's more ambitious grabs at heavy metal glory.

Though SPELL falls a bit short of achieving the lofty glory posited by their lyrical inspirations, "Opulent Decay" does still remain an effort worth listening to thanks to warm production, catchy bass lines, and its more understated stabs at fantasy rock.