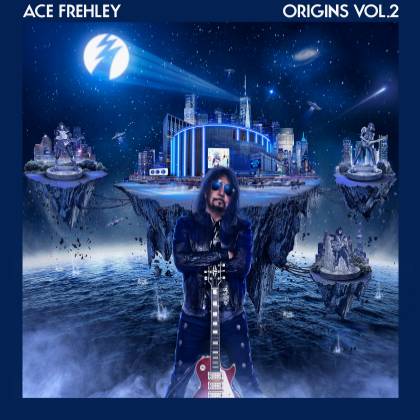 There comes a time in every veteran rock musician's life when he or she feel duty bound to make a covers album. Ace Frehley obviously enjoyed the experience of making 2016's "Origins Vol. 1" so much that he figured he could probably get away with making another one. All cynicism aside, it's hard to argue with the intrinsic take-it-or-leave-it entertainment value of fun times captured in the studio and tributes paid to some of the songs that first inspired the Spaceman to pick up a guitar and start his own rock 'n' roll journey. If you don't want to hear Ace Frehley having a lovely time, "Origins Vol.2" is not for you.

Of course, if you do fancy some excellent rock 'n' roll times in the company of KISS's coolest member (back in the day, at least),this will cheer you up beyond measure. Comprising boisterous and endearingly ragged renditions of songs by the likes of LED ZEPPELIN, DEEP PURPLE, THE ROLLING STONES and THE JIMI HENDRIX EXPERIENCE, "Origins Vol.2" arguably works best blasting through a car stereo, without too much attention being paid to what are mostly respectfully recreated rock standards. No one could possibly need more versions of "Good Times Bad Times" or "Space Truckin'" at this point, and yet Ace's enthusiasm is infectious, and his band play these songs with the swagger of real-deal musos, rather than merely sounding like a proficient wedding band.

Okay, so Mr. Frehley's voice is never going to win any awards, and it's hard not to wish that certain songs – "Space Truckin'" in particular – had been sung by someone else, but this isn't our party: a good time is being had whether we like it or not. Help is at hand anyway, because Lita Ford pops up for "Jumpin' Jack Flash" and the always splendid Robin Zander brings his unstoppable charisma to a suitably raucous stride through HUMBLE PIE's "30 Days In The Hole". Vocally speaking, Ace is much better suited to THE BEATLES' "I'm Down" and Jimi's "Manic Depression", and it's noticeable that the album's most striking moment is its least obvious: a deeply vibey take on CREAM's "Politician" that crackles with attitude, even if the backdrop of Ace's recent, erm, political commentary does take the edge off it somewhat. Ultimately, what really matters is that he plays his road-ravaged ass off throughout "Origins Vol.2", and the end result is, at the very least, a lot of fun.