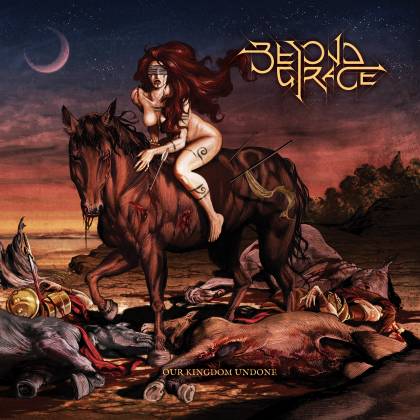 The grand resurgence of the UK as a death metal force continues apace. In fact, BEYOND GRACE were well ahead of the game, releasing a superb self-released debut album, "Seekers", in 2017 and, not unreasonably, ultimately finding themselves signed to PROSTHETIC RECORDS. Its predecessor skittered under the radar for most, and so "Our Kingdom Undone" acts as an irresistible introduction to the British band's unusually sophisticated take on technical death.

This is ambitious stuff. With a production job that favors clean crunch over abyssal squall and self-evident virtuoso chops, BEYOND GRACE exude the kind of haughty authority that bands like ABYSMAL DAWN and AEON have made such a fundamental selling point. Opener "Dark Forest Doctrine" is complex and angular, with countless tangential leaps and several moments of structural audacity, but it's also full of melodic intelligence and an exhilarating sense of pomp and grandeur. In contrast, "Hive Mind" is a full-on death metal barrage, albeit one full of curious twists and turns, while "Persona Non Grata" snaps from frosty melancholy to bellicose blast frenzy and back again, before a final, venomous descent into chainsaw-riffing Hell. Plainly resistant to repetition or the wheeling out of cliches, BEYOND GRACE could easily start chasing their own tails in a bid to torch the rulebook, but songs like the bludgeoning "Fearmonger" are bursting with memorable, if often willfully perverse, moments.

The strength of this band's vision becomes most apparent on the closing title track. A wayward but wickedly coherent 12-minute epic, it contains some of BEYOND GRACE's most thrilling melodic ideas, a bona fide fists-in-the-air chorus and a vivid glimpse of one possible and fervently progressive future for the men involved. From its opening rush of sinister melo-death to its second half's satanic panzer-grind into the breach and final, ultra-gothic descent into double-kick bedlam, it's a beautifully crafted piece of subversive heavy metal, and nourishing proof that BEYOND GRACE may be capable of even greater things. For now, this is another world-class missive from the UK death metal scene. Pay heed, this thing absolutely slays.