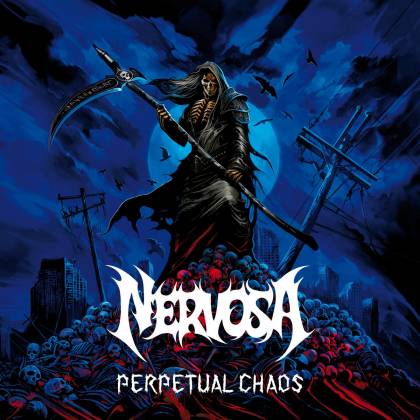 As seemingly impossible as it is to recreate the feral, chaotic energy of the early thrash scene, there are still bands out there with the requisite swagger and unhinged intensity to come pretty damn close. NERVOSA have long been one such band, but even their most diehard fans must have feared the worst when guitarist and founder Prika Amaral became the last woman standing last year. Showcasing a brand-new lineup, "Perpetual Chaos" is clearly the most important record of the Brazilians' career to date, and it's an opportunity that Amaral has clearly grabbed with both dexterous hands. The band's fourth full-length, and first since 2018's "Downfall of Mankind", is less the sound of a band reborn than the destructive fruits of some wild, boss-level mutant upgrade. Already considerably more vicious than many of their thrash metal peers, NERVOSA sustain unprecedented levels of intensity throughout these 13 short, sharp bursts of old-school fervor. It's the kind of ugly, explosive metal record that will make you drive badly, so please take note and be safe out there.

The strength and originality of Amaral's musical vision is brought into sharp focus here, too, even though "Perpetual Chaos" rarely strays from a brutish blend of scabrous thrash and ragged death. The devil is in the fine detail, from the woozy doom riffs that emerge unexpectedly between heads-down rampages to the creepy atmosphere that permeates NERVOSA's mid-paced riffing. Significantly, this new lineup has insane chemistry and has struck an immediate and dizzying balance between loose-limbed swagger and jaw-shattering precision. Despite the obvious sonic advantages of being recorded in 2020, "Perpetual Chaos" swings, stabs and batters like an old-school gem, with new vocalist Diva Satanica delivering some of the most charismatic snarls this side of HOLY MOSES' Sabina Classen. But NERVOSA never sound derivative or stuck in the past: the likes of incensed opener "Venomous", the pitch-black "Genocidal Command" and final, frenzied neck-wrecker "Under Ruins" are thick with post-millennial crust and underpinned by firmly contemporary levels of bowel-rattling heft.

If one song sums the whole thing up, it's "Time To Fight"; 153 seconds of obnoxious, punked-up speed metal, it's gloriously snotty and unapologetic, brutal as hell and proudly steeped in the underground's grubby aesthetics. Ultimately, it's the kind of album that separates the diehards from the dabblers. Meanwhile, NERVOSA are newly equipped for the long haul. "Perpetual Chaos" is an absolute ripper. Don't you just love it when a plan comes together?