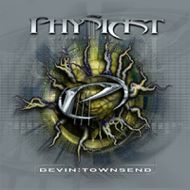 While there's no doubt about the fact that Vancouver-based whiz-kid Devin Townsend is among the most uniquely talented and musically proficient artists in the heavy rock genre today, the singer/guitarist's penchant for jumping around between different projects and the resultant lack of consistency have clearly stood in the way of his making a significant commercial impact with any of his releases thus far. Devin's latest undertaking, PHYSICIST, is unlikely to change this scenario, as the self-titled debut album delves into a musical space that falls somewhere between the manic energy of STRAPPING YOUNG LAD and the more orchestral pop-flavored sounds of OCEAN MACHINE, with very little to offer that would separate it from either band, ultimately only adding to the overall confusion with regards to each act's individual identity.

Much to Devin's credit, his songwriting output is truly unlike that of anyone else, and in a typical fashion, PHYSICIST manages to marry a host of influences that, in lesser hands, would come across like a disastrous mish-mash of clashing musical ideas. This is no more apparent than in "Death", a SYL-like high-energy stomper that combines MORBID ANGEL-like death metal riffs and QUEEN-style harmonies to surprisingly great effect, and the ambitiously epic-like closer "Planet Rain", which is truly unlike anything else previously attempted in the modern heavy rock genre.

Less intense than STRAPPING YOUNG LAD and musically inferior to the best moments on Infinity and OCEAN MACHINE's Biomech, Physicist is nevertheless a far more compelling effort than most, and as such, it should still be considered an essential purchase for any self-respecting hard music fan.