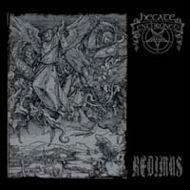 You should never judge a book by its cover, of course. Neither then, should you judge a band like HECATE ENTHRONED by the intricacy of their album cover art, which depicts angels and demons sparring mightily in the heavens above a sleepy countryside scene. As a piece of gloomy illustrative work, this is pretty impressive as the one-time heirs elect to the British black metal throne occupied by CRADLE OF FILTH (who once featured former HECATE ENTHRONED member Jon, incidentally),HECATE ENTHRONED are anything but impressive.

Think back to a time when the corpse paint was as thick as it is now, but none of the black metal fraternity really knew their way around their instruments. This is where "Redimus" fits right in with all its clumsy, over-ambitious, poorly executed methodology. As an album, it doesn't really warrant the intro of spooky ambience (helpfully titled "Intro") because there's nothing of any substance to build up to. "Soil Of Sin"? A collision of predictable one-fingered keyboard stabs and generic guitars. Sinful, indeed. And as soiled as a public bathroom during a dysentery outbreak. "No One Hears"? You really shouldn't really have to, but check out the disastrous drumming anyway. It's hard to choose between that and the rest of the band for who comes up with the worst performance.

Satan enthusiasts — like many advocates of religious practices to this particular reviewer — were always prone to bullshitting anyhow, but to state, as the HECATE ENTHRONED publicity blurb does, that "Redimus" possesses "a massive guitar and drum sound" must be one of the greatest lies ever told. OK, so there's some instrumental separation here, but that's nothing to shout about when the general sound is barely big enough to tickle you gently. Where's the ominous crescendo of sound that should lead the acoustic intro into bellowing guitars on "As Fire"? Is a volley of symphonic bombast here and there too much to ask for? What exactly has producer Phil Green (?) been paid for?

Ultimately, "Redimus" must go down as one of the least threatening black metal albums of all time. Say what you like about CRADLE OF FILTH, but at least they know how to make an occasion of their albums. If Dani Filth hears this, he'll be pissing his spiky little codpiece with laughter.