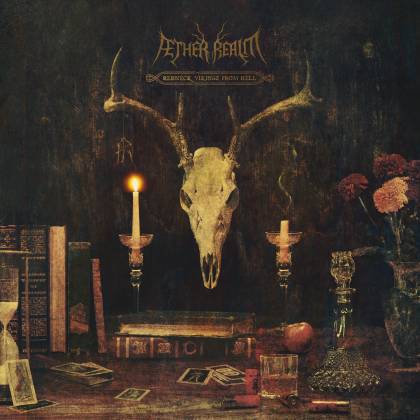 It might be a slight exaggeration to say that AETHER REALM are attempting to be all of your favorite bands at the same time, but they're certainly demonstrating a phenomenal grasp of multiple metallic disciplines on "Redneck Vikings From Hell". Perhaps mindful that bands from the US generally don't sound like they've been brandishing swords in moonlight forests, there is plenty of straightforwardly modern and melodic metal lurking at the heart of this record. But the overall impression given is of a band that are so thrilled by metal's limitless possibilities that they feel compelled to ensure that as many different strains of it as possible dance to their tune. If you're a fan of melodic death metal, folk metal, progressive metal or old-school heaviness, the North Carolina quartet have you covered. "Redneck Vikings From Hell" is a riotous celebration of modern metal's myriad potent strains, and that's a laudable endeavor in itself. What is far more surprising is how skillfully AETHER REALM have managed to straddle all these stylistic variants while never sounding like a band in search of a coherent identity. Doubtless we all die a little when some gurning TV judge credits some howling cretin with "making the song their own," but that's exactly what AETHER REALM do here, again and again, as they peel off stirring refrain after lacerating hook, always sounding like a robust and characterful unit, but one in thrall to metal's universality, rather than merely exploiting its niche potential.

Of course, if you only listen to the first few bars of the opening title track, you could be forgiven for thinking that AETHER REALM are firmly on a Scandinavian folk metal tip and that this is squarely aimed at ENSIFERUM and FINNTROLL fans. Not that the Americans sound like they're copying anyone, but it's an anthem that will resonate particularly strongly in Europe, where this kind of thing packs a considerable commercial punch, and the raucous, beer-swilling jollity of the whole thing is undeniable. Once you spot the clattering banjos and other deft nods to Americana, the fiendish nature of AETHER REALM's masterplan becomes apparent. As we rattle through a following tsunami of giant sing-alongs and moments of startlingly inventive extremity, it's obvious that AETHER REALM are smarter than the average metal band, and that maybe it is possible to be all things to all metal people. "Goodbye" is a glorious slice of grandiose, mid-paced melo-death, with shades of PARADISE LOST and SENTENCED in the riffing and brief bursts of spectral EDM lurking in the background. It is, like everything else here, obnoxiously catchy and convincing. "Lean Into the Wind" ratchets up the symphonic quotient, welding it to some blistering, state-of-the-art death metal fury, eviscerating blastbeats included. "Hunger" is another wild hybrid of melodic brutality and sparkling, symphonic touches, like OMNIUM GATHERUM on a runaway hearse-ride to hell, before the chorus kicks in and the box marked "power metal splendor" is ticked with one masterful swish of the AETHER REALM scythe.

Somehow, that versatility is maintained throughout "Redneck Vikings From Hell", with a wide array of familiar tropes being polished and repurposed, all in the service of a band who seem to know exactly who they are, despite their eclectic tastes. The closing "Craft and the Creator" hammers the point home: 11 minutes of sublime progressive heaviness with several colossal melodies and dynamics to die for; it's an audacious end to an album that aims to please and leaves no stone unturned in the process. Most importantly, this is guaranteed to be one of the most straightforwardly entertaining metal albums of the year. This could – maybe should – be huge.