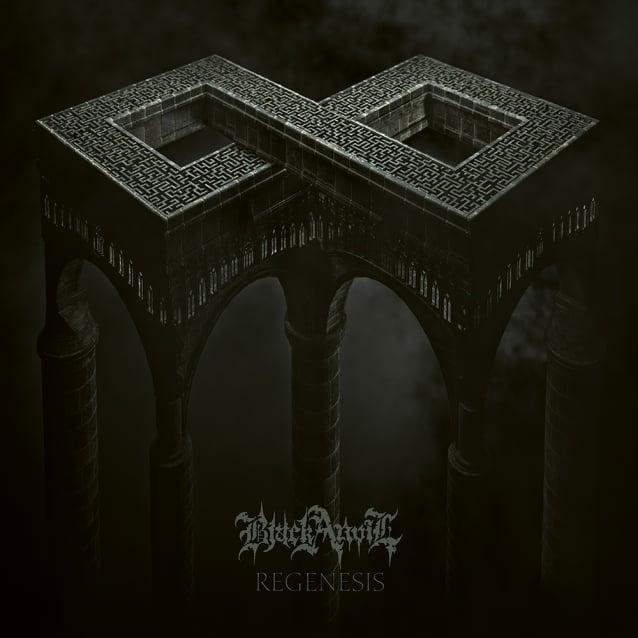 There was always something terrifyingly real about BLACK ANVIL. Back on the NYC crew's 2008 debut album, "Time Insults the Mind", they reimagined black metal's marauding frostiness as a bitter wind that howls around turbulent urban environs, with grittiness and pain-fueled bravado in copious supply. The albums that have followed have all expanded upon that initial blueprint as BLACK ANVIL embraced a bigger and more ambitious sound, honing their songwriting with each successive step. As such, "Regenesis" feels like a culmination: the final evolutionary step along a crooked, left-hand path. The spit-drenched fury of old is still indelibly etched into this band's creative psyche, but the sound of irreversible progress is unmistakable.

Five years on from the flawed but fascinating "As Was", BLACK ANVIL seem more confident in their stylistic freedom. "Regenesis" is full of grand and bombastic black metal songs, exemplified by the rapacious pomp of opener "In Two" and the explosive "Castrum Doloris". But this is an album that builds and blossoms in real time, and from the punishing "8-bit Terror" onwards, the New Yorkers' inquisitive streak begins to exert its grip. After "29" snaps nimbly from all-out nihilistic fury to ornamental post-punk and back again, "Silver & Steele" slowly unfolds, revealing BLACK ANVIL to be noirish melodicists riding on surging waves of bittersweet post-rock sludge. Their in-built vehemence never quite disappears altogether, but subtlety and nuance have fought their way to the front. The result is an album that flows beautifully, unexpected off-road adventures included.

The finest moment is shared between the two-minute industrial miasma of "VV" and the bleak melodic gem that follows: "NYC Nightmares". The song is another slow-drift, disarmingly melodic piece, that somehow manages to evoke suffocating, Lovecraftian dread, while also reeking of broken beer bottles and piss. Similarly, "Grant Us His Love" takes BLACK ANVIL's straight-ahead black metal instincts and twists them to the breaking point, as salutary brass and military drums waft up from the city sewers. A fitting finale, the title track is equal parts barbarous blasting and ghostly, prog-tinged squall. It ends abruptly, knockout punch-style, as if Hell's demons have been mown down by a speeding Jeep.

There's blood on the windshield and that's exactly the way BLACK ANVIL like it. "Regenesis" is both their strongest record to date and a vivid, spinning signpost to whatever comes next.