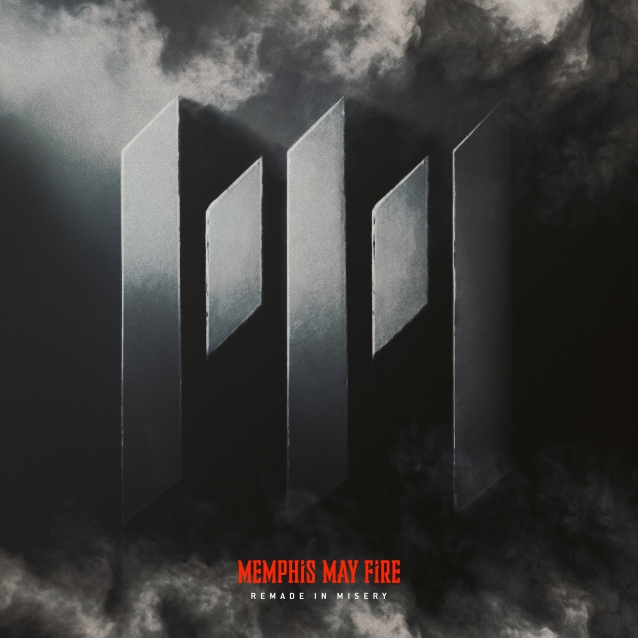 MEMPHIS MAY FIRE's "Remade In Misery" comes shortly after the similarly titled SILVERSTEIN release "Misery Made Me". And while the musical styles are slightly different, both bands seem to have arrived at the same conclusion several albums into their respective careers: Pain may be unpleasant and all too persistent, but it's part of their identity. Embracing suffering is something everyone must eventually do to gain emotional maturity, and that's perhaps doubly true for acts that run in metalcore circles. By accepting this truth, MEMPHIS MAY FIRE also sound like they have fully developed their sonic identity.

Lyrically, their seventh record portrays someone who is wounded but determined to survive, yet still floundering from time to time in their confidence. Hard-hitting, fast-paced, aggressive tracks like "Blood & Water" and "Bleed Me Dry" provide foils for slower, more melodic, pop-leaning tracks like "Somebody" and "Make Believe". Conviction and uncertainty may seem like opposing concepts, but ultimately, the closing ballad, "The Fight Within", reconciles that they are two sides of the same coin, saying: "I might be lost until I reach the end / but I'll keep movin'."

In terms of sound, MEMPHIS MAY FIRE have struck a solid balance between their metalcore roots and their pop, electronic and even rap influences. The heaviness that launched the band's career provides the backbone for this record, while the other styles lend different flavors to the 11-track work. The band sound sure of themselves, which is satisfying in and of itself. But one area that has always held them back a little is their mostly predictable song structure. The biggest surprise on "Remade In Misery" is the FIRE FROM THE GODS singer's appearance on "Only Human (feat. AJ Channer)". His lower register rapping and unclean vocals provide excellent contrast to Matty Mullins's higher-pitched melodies. Channer's delivery is especially intriguing, like when he plays on the song's title with slant-rhyming lyrics such as, "I'm just like you, man."

Though the record falls short of mind-blowing, "Remade In Misery" is full of energy and is dynamic enough to be gratifying. More than that, though, the album's success comes in the form of confidence, even in moments of emotional confusion and vulnerability. MEMPHIS MAY FIRE are clearly professionals.