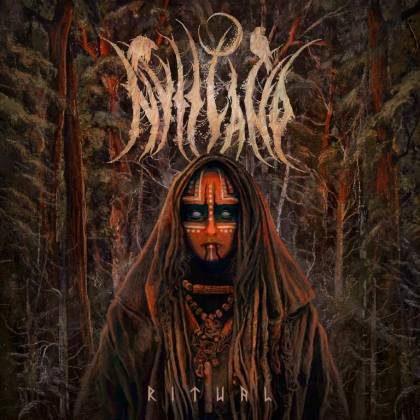 As much as the phrase "each to their own" has been co-opted to justify people having shit taste in music, it's always good to be fair. NYTT LAND do not play any kind of rock or metal music, instead channeling their Siberian roots into a dark strain of atmospheric, ambient and primarily acoustic folk. If you're not a massive fan of throat-singing, mouth harp and people banging twigs together, you may politely take your leave.

Meanwhile, people have been going absolutely nuts for bands like WARDRUNA and HEILUNG over the last few years. And rightly so, because when heavy music finds itself in a commercial cul-de-sac, the underground always finds new avenues to pursue. This vague gaggle of like-minded ensembles can hardly be labelled as a scene, so fundamental is isolation to each one's evolution, but they each possess the ability to make strange, hypnotic music that, for any number reasons, clearly resonates with a lot of metalheads.

NYTT LAND have been around for many years, and while their signing to Napalm Records is a great move for the label, "Ritual" sounds like the work of a band with few mainstream intentions. No clumsy cover versions of rock anthems here: instead, this is a deeply absorbing journey through frostbitten forests—and not the usual Norwegian ones. As most of us will never have been abandoned in the Siberian woods and preyed on by troubled spirits, it is hard to know how precisely and authentically NYTT LAND are conjuring the vibrations of their ancient home soil, but just as WARDRUNA have elegantly tapped into the universal unknowable, so the likes of "The Fires of Ragnarok" and "Dead Man's Dance" have the potential to deliver a feeling beyond words, even if you're not three bong hits down and circling the pizza-hole.

There are moments when a throbbing, rock 'n' roll undercurrent bubbles up from the depths and gives "Ritual" an ephemeral air of modernity, but in every other respect this is a transportive hallucination: echoes of a still breathing past, wafted across the tundra in our direction. If, indeed, tundra is the right word.

Just this once, "each to their own" seems appropriate. Don't come looking for riffs. Just bring an open mind and some really thick fleece mittens.