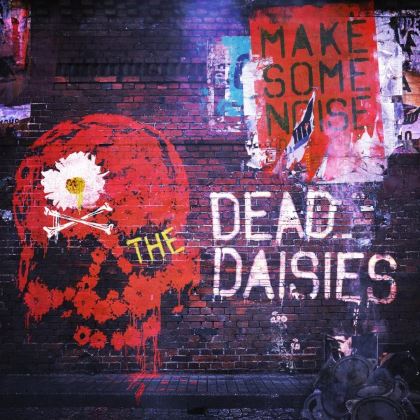 Rock supergroup THE DEAD DAISIES, in the span four years, sure has had a ton going on! What MINK's David Lowy and Jon Stevens of INXS/NOISEWORKS had in mind when putting this group together surely couldn't have included a revolving-door policy. It rings more like an open-door policy as the collective has gone through enough regular, studio and touring personnel to assemble a full hockey team with one winger to spare. In the past, notables such as Dizzy Reed, John Tempesta, Charley Drayton, Darryl Jones, Tommy Clufetos, Alex Carapetis and Frank Ferrer have hung their hats in THE DEAD DAISIES.

This is a band that has made all the right moves, and that has been recipients of the right fortunes. The band has released two EPs and now three full-length albums in three years. The group has become staple KISS openers, and it has toured with WHITESNAKE, ZZ TOP, AEROSMITH, BLACK STAR RIDERS, LYNYRD SKYNYRD and BAD COMPANY. Its 2013 single "Lock 'N' Load" became that rare rock jewel in the hip hop rough. It was a quantifiable success that rocked football stadiums, including Wembley's annual NFL match between the Jacksonville Jaguars and San Francisco 49ers. THE DEAD DAISIES was the first Western rock band invited to play Cuba after U.S. sanctions were lifted, no doubt the inspiration behind their last album, "Revolucion". If this band was originally assembled for fun, nobody, especially David Lowy, could've projected that THE DEAD DAISIES would have reached this far at so rapid a pace—not in this market, anyway.

Lowy is all that remains of THE DEAD DAISIES original inception, thereafter, THIN LIZZY bassist Marco Mendoza and journeyman drummer Brian Tichy boast the most tenure. Following the 2015 departure of Jon Stevens, MÖTLEY CRÜE/UNION/THE SCREAM vocalist John Corabi secured the mike, while the esteemed Doug Aldrich recently joined to fill out the lineup as second guitarist. If your band is out to make some noise, Aldrich and Corabi are the right guys to help you do it.

THE DEAD DAISIES's latest album lives up to its preamble. Give David Lowy credit for his diehard spirit. The group continues to play hard rock on "Make Some Noise", and they rock it like it's 1987 and the entire world is the band's arena. Throw out a couple of so-so covers—CCR's "Fortunate Son" (a song tackled by a ton of rockers, none with the crazed urgency of THE CIRCLE JERKS) and THE WHO's "Join Together"—and you'll see that this is a solid outing. A great performance, John Corabi shrugs his hovering MÖTLEY monkey away, i.e. "the fucking monkey in my brain," as he chimes for THE DEAD DAISIES on "Mainline".

Sad that Corabi still today has to answer for the controversial 1994 "Mötley Crüe", an album that may have been an about-face, but undeserving of the crucifixion it's suffered—particularly by Nikki Sixx in recent months. To see Corabi play his live solo gigs is to see numerous fans encouraging a singer who's taken more abuse than he deserves but still has the fire inside to take his rightful place in this scene. THE DEAD DAISIES are a perfect fit for Corabi, and he makes the most of it on the throbbing "Long Way To Go" and "How Does it Feel", the writhing, funky "We All Fall Down", and the speedy "Mainline", where his note extensions get collected into sped-up passages. It's such an appealing and professional delivery one has to cheer for the guy from stretched ankles.

As it should be, the title track is a booming affair with Brian Tichy leading a stomping groove with dense, precise riffs and a gang hollering of "Make some noise!" You just know THE DEAD DAISIES is seduced by the prospect of haunting sports stadiums yet again with an irresistible crowd participation jam. It won't be merely the group's own gigs with voices bellowing back at them if the NFL, NHL and MLB get wind of this cut. Later, the boogie-slapped "Freedom" echoes faintly of AC/DC's "Beating Around the Bush". The song boasts powerful drum beatdowns on the verses, and rings more like late '80s power rock anthem on the choruses.

Therein lies the primary vibe to "Make Some Noise", as THE DEAD DAISIES dishes out a generous helping of '80s-dug heavy rock with larger-than-loud production by Marti Frederiksen. In many ways, this lineup sounds like the lineup to soldier on with, pending the members' other obligations. If this on-fire trend remains friendly to THE DEAD DAISIES, then look for another new EP next week.