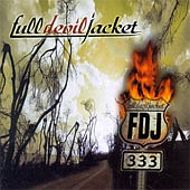 At a time when most of the up-and-coming heavy rock acts appear to be derived from the KORN / LIMP BIZKIT school of songwriting, it is truly refreshing to come across a band that is modern sounding yet doesn't succumb to the idea that one must incoprorate hip hop infuences into its style in order to have a chance of becoming commercially successful. Coming across like a potent mixture of ALICE IN CHAINS, FILTER, BUSH and GODSMACK, Jackson, Tennessee's FULL DEVIL JACKET may not be breaking any new musical ground with their perfectly balanced blend of dark, haunting melodies and super-heavy rhythms, but they execute their songs with more conviction than virtually anyone else that has attempted this sort of sound over the course of the last decade (at least since AIC's classic—and decidedly less aggressive—Dirt release).

Although the whole band should be credited for their truly excellent performances, it is undoubtedly vocalist Josh Brown that shines throughout the 11-song CD, his vocal style spanning everything from the aggressive growling of "Mr. Wiggly" to the Layne Staley-like soulful delivery of "Fastblack". The music itself is similarly diverse while retaining a uniformly downbeat groove, never sacrificing melody for pure aggression or vice versa, and consistently producing the kinds of dynamics that are sadly missing from the bulk of today's new releases.

It is not very often that a band as talented as FULL DEVIL JACKET comes along, and there aren't many albums that I would recommend more highly than this stunning full-length debut.