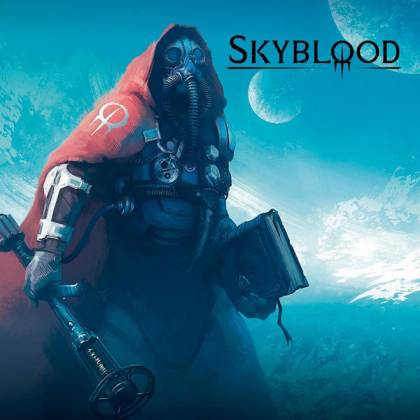 You don't get to sing with CANDLEMASS and YNGWIE J. MALMSTEEN unless you've got one hell of a voice. Mats Levén has done just that, of course, not to mention countless other projects from Leif Edling's psychedelic doom side-project KRUX to neoclassical power metal with Germany's AT VANCE, and so the arrival of his first solo album should send a shiver of excitement through anyone that has listened to the Swede's gloriously rough-hewn and soulful voice over the years. Frankly, he's one of the best in the business and this whole enterprise feels long overdue. Fortunately, it's really, really good.

Now operating as SKYBLOOD, Levén isn't going to freak anyone out with the stylistic choices he's made here. That voice plainly belongs within the worlds of doom and traditional heavy metal, but these songs also hint at a quiet affection for alternative rock and the darker end of grunge, albeit with everything then filtered through the singer's dramatic instincts.

First single "The Not Forgotten" encapsulates where this album dwells: this is gnarly but fervently melodic hard rock, bolstered by the low-slung rumble of doom but never dominated by it. Meanwhile, the singer's performance is, in the best possible way, nothing short of wild. Man, this dude can sing.

Impressively, Levén has performed the majority of instrumentation himself, and he's done an incredible job – there are numerous moments that exude a real band feel, but also countless ornate embellishments and flashes of quasi-orchestral trickery that give the likes of "Once Invisible" and "The Voice" both a faint air of KING DIAMOND shlock and an underlying rush of symphonic pomp. "One Eye For An Eye" flings open the doors of Levén's thematic grimoire, resulting in a sublime tangle of AOR hooks and lurching momentum, a magnificently overwrought chorus included.

There are no weak songs or calamitous tangential leaps on "Skyblood", which is not something we often say about an established musician's first solo foray. But having spent decades as a foil for other people's ideas, Mats Levén seems to have snapped immediately and perfectly into his new identity as a solitary creative soul. You can hear his mad-eyed joy at the limitless possibilities in front of him as he scales the octaves and revels in prog-tinged bombast during 10-minute closer "Le Venimeux". And there is simply no denying the overwhelming charm and class of the whole thing. Time for one of modern metal's unsung heroes to step into the spotlight.