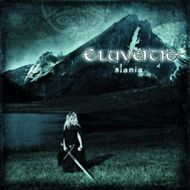 Combining metal with other musical forms, such as classical and folk, is nothing new, but there is something about Celtic folk music that almost always seems to bring about a certain synergy and power in the compositions. By itself Celtic Folk music is full of life and the melodies have a way of moving the listener in a way that other forms only do inconsistently. But when combined with metal, the results are intriguingly arresting, as is the case with "Slania" from Switzerland's ELVUVEITIE. This is not to say that "Slania" reaches levels previously unattained by folk metal acts; only that the album is yet another demonstration of the success achieved when the two musical forms are blended.

No less than nine musicians make up the act known as ELUVEITIE and at one point or another each adds meaningful contributions to the mix. Rather than the all guns blazing style of folk metal that has been perfected by bands like KORPIKLAANI, the sound of ELUVEITIE is driven by a Swedish melodic death metal style then either flavored or complemented with Celtic folk. Songs such as "Primordial Breath", "Grey Sublime Archon", and "The Somber Lay" are textbook examples of the DM side of the equation, Celtic touches notwithstanding. Then you get songs like "Inis Mona" where the folk factor shines brightly, especially on the incredibly catchy chorus, perhaps the best on the album. "Anagantios" is an instrumental piece with strings that is purely Celtic, as is interlude "Tarvos". Along with the above mentioned "Inis Mona" the other album high point is the slower paced and Celtic-inflected "Slanias Song", which features wonderful female lead singing with some juxtaposing aggressive vocals. The melodies throughout the album are smartly written and the band's DM proclivities are convincing.

As a matter of fact, there is nothing here that warrants any kind of negative criticism, unless you want to nitpick about the handful of DM dominant tunes that don't reinvent the form. Overall, "Slania" is a quality product and an easy recommendation for fans that want to check out the folk side of metal without diving in headfirst.