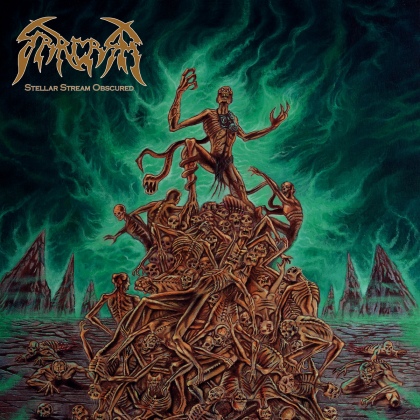 01. Through The Crystal Portal
02. We Only Saw The Shadows Of Life
03. Ancient Visitors
04. The Spinning Tomb
05. Obsidian Eyes
06. The Powers Of Suffering That Be
07. Apocalyptic Serenity
08. Let Us Descend

Veterans of the Swedish death metal underground, SARCASM first formed in 1990, split in 1994 and re-emerged in 2015 with a revamped sound and Hell's flames blazing in their eyes. Three albums later and it seems likely that "Stellar Stream Obscured" is exactly the record the band would have dreamt about making back in the day: epic, grotesque and steeped in the grand, grim traditions of MORBID ANGEL, DISSECTION and POSSESSED, it's also a ferociously contemporary piece of work.

"Through The Crystal Portal" may be the most unhinged album opener in recent memory. Spikily melodic, but relentlessly violent and willfully angular and obtuse, it's the kind of sonically punishing old-school riot that keeps the arcane metal flame burning through sheer force of belief. Likewise, "We Only Saw The Shadows Of Life" sounds like ten classic underground bands at once, but with the Swedes' militant delivery placing things firmly in the bloody here and now. Not content with sending a few thousand volts through death and black metal, SARCASM switch to ghoulish doom mode for "Ancient Visitors": a towering paean to the unfathomable dark, with acres of atmosphere.

Living up to its name, "The Spinning Tomb" is wild, hook-heavy death metal with a blastbeat heart and an evil thrash soul; "Obsidian Eyes" is a morbid but pitiless melodrama, with ornate, proggy embellishments adding dynamic oomph to a GRAVE-like barrage of riffs. Meanwhile, "The Powers Of Suffering That Be" brings hulking death doom riffs and a poisonous, blackened attack together in a shower of pitch-black sparks; while "Let Us Descend" is a richly malevolent curtain call, with a wickedly cinematic, instrumental overture giving way to a deliciously high octane and hostile black-thrash endgame. Every last second of "Stellar Stream Obscured" hits the target with a haughty, malicious flourish.

The band's previous three albums were all pretty damn good, but this is seriously fucking great: And I mean that sincerely.