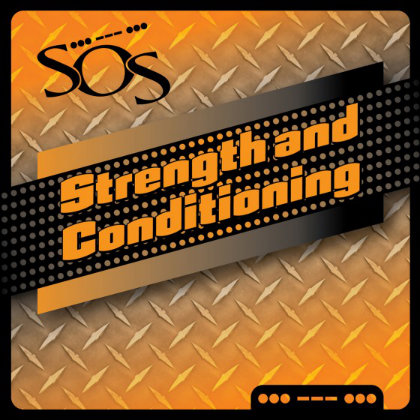 SOS have always one of the more unique punk acts out there, unique being subjective at this point. They've been around since the late Nineties and now through five albums, band leader Mike SOS has apparently decided that playing NYC street 'core wasn't enough. Some lineup changes and an abrupt alteration to the band's hefty hardcore sound leads to their first album in six years, the awkward "Strength and Conditioning".

SOS have been authentic punkers over the years with relatively straightforward vocals ("Old No. 7" from "A Guide to Better Living" being as extreme as SOS has pushed it in the past). At least the singing in this band has previously been less over-the-top than what they're shoving into their listeners' ears on "Strength and Conditioning". A press release describes guitarist/vocalist Mike SOS' vocals as "unhinged" on this album and that's a gross understatement. Iggy Pop in the late sixties is properly unhinged. H.R. of the BAD BRAINS is the definition of unhinged in the most righteous sense a maverick vocalist can be. In this case, unhinged is something altogether different and Mike SOS plays it like an assumed foil in the effort to make a quirky statement. If you're devoted fan of SOS, you hopefully get it, since they've always noodled around with their music. "Strength and Conditioning", however, is a far step from the early days and even 2005's awesome, star killing "A Guide to Better Living".

Mike SOS also haunted the rambunctious but strangely fun SEIZURE CRYPT before that act was laid to rest. So the writing should've been considered scratched into the paint-chipped wall where he'd be going on "Strength and Conditioning". With all due props, SOS gives to their community in the way of free outdoor all-ages shows and they've religiously played the New York City Marathon over the years. That being said, "Strength and Conditioning" requires plenty of both from their listeners if they're going to make it through near fifty minutes of SOS' game-changing insanity.

"Let Them Come" steps off with a shuffle rag and plugging distortion that drowns Mike SOS's brusque vocal plod. His echo-bounced singing is callous, even as the band kicks up the amplification that's already loud to begin with. "Disengage" steps up the tempo and delves thicker riffs which don't altogether consume Mike SOS' crazy swills. Consider that good or bad to your level of taste. At one point, his already shaky singing devolves into a lunatic shriek and it hurts the song's general pounce.

Finally on "Run it Down Into the Ground", the chunky, grinding riffs gives something substantial to excuse Mike SOS' retching and screeching. By now, "Strength and Conditioning" comes off like twisted farce — at least one would hope it's a farce. The switch between tough chunk verses and relatively melodic choruses are worth paying attention to, but the disruptive baying, given more prominence in the mix, doesn't allow for much opportunity to sink into this song's groove.

The lightning fast "No More Black" is one of the best tracks on "Strength and Conditioning", that is, without the annoying up-and-down caterwauling. If Mike SOS had stuck to the primary growl he leads off with, this track could've been a true punk monster. Afterwards, the shucked and bluesy intro to "Low Road" once more sets an inviting mood that might as well not have been bothered with once the over-sprawled singing offsets the whole thing. Some poorly-mixed overdubs also drag the song down, which would've been better off played as an instrumental jam.

And what is Mike SOS doing on "Outgrown" by spiking and plummeting his vocal ranges, plying to be a would-be King Diamond of hardcore? "Outgrown", a misnomer title if there ever was one, is (intentionally, no doubt) a childish rant piece with a cool punk drive and a neat raking outro going for it, but that's about all. "Whatever Happened To…" thereafter is no better and the sad fact becomes this band can sustain plenty of energy without vocals. It's clear the new lineup (including bassist David DeCanio, drummer Brett Thompson and guitarist Nick Pursche) are sharp musicians as the lofting, well-constructed instrumental "Daytime High" proves. The scraping guitar intro to "Whiskey Beard" is kickass, likewise its subsequent punching groove. A far cry from anything on "A Guide to Better Living", alas.

A little madcap fizzle fry to music that's destined to go no further than the underground is welcome incrementally. For an entire forty-eight minutes, however, it's a pisser. Mike SOS has a great reputation in the punk leagues, but the goony shock factor mashed all over "Strength and Conditioning" does no credit to himself or the band. Disappointing, to say the least.