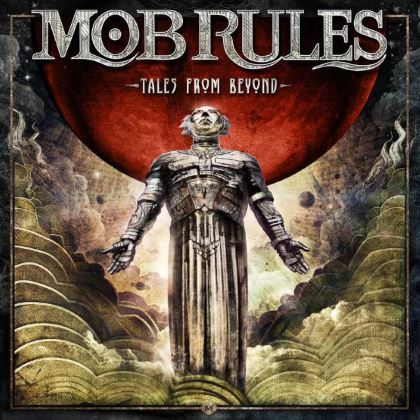 Veteran German power prog band MOB RULES returns following its "Timekeeper" compilation and 2012's "Cannibal Nation" prior to that. "Tales From Beyond" is as meticulous and grand-scoped as anything MOB RULES has attempted, including the self-contained trilogy based on Andy Weir's book "The Martian".

The album opens with the eight-and-a-half-minute "Dykemaster's Tale", based upon Theodor Storm's 1888 novella "The Dykemaster", aka "The Rider on the Grey". Storm's story involves a young dykemaster butting heads with townsfolk who accuse him of being in collusion with evil for refusing to sacrifice a dog at a ceremony celebrating his radical new dyke's completion. Post-mortem, his phantom rides his grey steed anytime the dyke threatens to break from harsh sea conditions. While executed wonderfully, MOB RULES' "Dykemaster's Tale" is grossly derivative of IRON MAIDEN's past few albums, with a few added accouterments such as strings and tin whistles. However, the band believes so much in its narrative that it keeps the listener invested. Unfortunately, that ever-hovering MAIDEN breeze hurts the track, no matter how long MOB RULES itself has been in this scene. Later in the album, the band consults both MAIDEN and SAXON on "My Kingdom Come" with their own keyboard, violin and cello embellishments added.

"Somerled" dives into standard epic metal mode on the trails of a bagpipe intro, hammering and marching along with whumping power chords, Jan Christian Halfbrodt's tolling keys and Klaus Dirks's heroic crooning. Here, MOB RULES pays homage to the Scottish warlord Somerled—referred to as the King of the Isles—a half-Scot, half-Viking from 1140. He was exiled from his homeland, Argyll, goes on to conquer it, and make peace with the Vikings by marrying the king's daughter. Covering far more ground in less than two-minutes time, "Somerled" is pure gallantry on parade with Matthias Mineur and Sven Ludge's brazen guitars raging like sword tips chopping through all obstructions. "Signs" thereafter is a pounding ballad with all the muscle you could ask from it; slower but heavier measures and wonderfully sculpted bass and guitar layers make this one a must-hear.

The centerpiece of the album, of course, is the three-part "A Tale From Beyond", one of the most encompassing ventures MOB RULES has ever tackled—and this band has consistently set its own bar high over 22 years. The ambitious cycle, based on the book version of "The Martian", which became the breakout sci-fi film directed by Ridley Scott in 2015, is broken down as "Through the Eye of the Storm", "A Mirror Inside" and "Science Save Me! "MOB RULES' melancholic projections through "A Tale From Beyond" convey empathy for stranded astronaut Mark Watney and the fated Ares 3 crew. It's a tough but frequently engaging excursion as Klaus Dirks seizes the opportunity to metaphorically bleed all over "A Mirror Inside" with grievances of his own and those of the band. The climax of "Science Save Me!" later is oxygen-sucking spectacular.

As ever, MOB RULES exhibits a classy form of power prog with terrific professionalism and inspiration derived from literature and world history. "Tales From Beyond", which could've easily been a Piers Anthony or Isaac Asimov metal extravaganza from start-to-finish, whisks listeners into many different portals to get lost in. These windows help the listener overlook the blatant IRON MAIDEN rips in those spots. Meanwhile, the remainder of the album adheres to the BLIND GUARDIAN and HELLOWEEN-forged constructs of progressive power metal that just about everyone accesses.