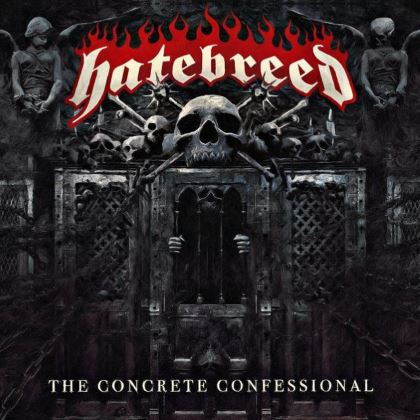 Metalcore can mean very different things depending on who you're asking. Is it the noise rock inspired hardcore psychosis of DEADGUY? Or is it the more recent AT THE GATES and Swedish melodic death metal-influenced stylings of AS I LAY DYING? Internet warriors can grit their teeth and battle eternally about that if they'd wish. In any event, HATEBREED has been tagged as such, apropos if you recognize the obvious metallic hardcore elements and espoused hardcore ethos. This attitude is embodied overtly by vocalist Jamey Jasta's concise and motivational lyrics, which mesh sonically with the trappings of Floridian death metal, thrash and nineties aggressive metal. Whether it's palatable to one or not, there's no questioning the fact that the band has left an indelible impression upon a variety of popular and underground strands of metal and hardcore in the new millenium.

HATEBREED's agenda, since day one, has seemingly been to clobber listeners senselessly with their music. Bands with this mindset can understandably have an abundance of energy when they come together in garages as 18-year-olds, but the challenge for long-running bands of this ilk is retaining their ongoing relevance and potency. Sure, the band has broadened its horizons since its inception, but it's HATEBREED. Not known for its dynamics, the band has developed a formula and maintained course all the way through studio release number seven: "The Concrete Confessional". The group's tenacity is admirable; yet it remains as inconsistent as it has been for the better part of the last 10 years.

In terms of the potency factor—the energy and aggression—the band hasn't lost steam. "The Concrete Confessional" is generally linear, formulaic HATEBREED, though the music is occasionally peppered with Jasta's improved melodic vocals. This is evident on "Something's Off", a hook-laden track that's catchy and addictive even beyond the singing. Drummer Matt Byrne's pummeling, to-the-point approach continues to offer perfectly placed percussive nuance.

"The Apex Within" starts off with gang bellows, and it stumbles along with a riff that's forgetful enough you can instantly earmark the song as filler. But HATEBREED grabs you by the shoulders and demands your attention with the very next song, "Walking The Knife". This track begins with a lurching, low-end riff before building up to a frenzy punctuated with Jasta's significantly smoldering vocal outpouring and brief bursts of blast beats. The stuttered, buzz-saw riff that opens "In The Walls" sets the tone for the track's menacing energy that defined HATEBREED's classic debut full-length: "Satisfaction is the Death of Desire".

SLAYER-esque thrash is a longtime staple within HATEBREED's music, and drives a considerable amount of the material on "The Concrete Confessional". This is on display most prominently with the blistering opening track "A.D." and its tight riffing. The band also takes advantage of its prowess with slower tempos, propelling chunky, groove-based songs like "Seven Enemies".

"The Concrete Confessional" is far from being weak or light, but long-term HATEBREED fans will most likely be left wanting more ferocity, which the band is more than capable of delivering. It isn't a bad release, and it is more satisfying than the majority of what you'll hear in contemporary aggressive metal and hardcore. It just isn't a great HATEBREED album.