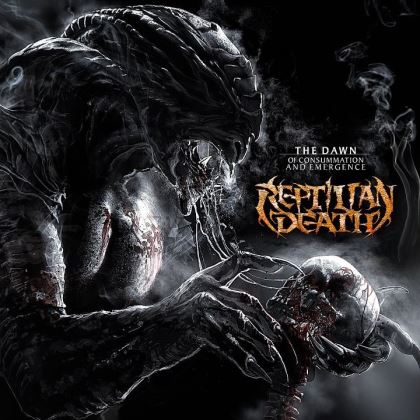 The Dawn of Consummation and Emergence

01. PrimEvil
02. Inchoate
03. Stimulate Hike Impel Tear
04. Soaked with the Imperfections of Puerile Blood
05. Emerge, Hatred, Emerge
06. Distorted by Bondage Blood and Bestiality
07. Unnervingly Perverted at the Altar
08. Patchwork and the Art of Skinning
09. O
10. Now You Graze Upon Me

You have to have a sick sense humor to call yourself REPTILIAN DEATH. Hailing from Mumbai, India, REPTILIAN DEATH is the side project of DEMONIC RESURRECTION vocalist Sahil "Demonstealer" Makhija. Existing for more than a decade as Demonstealer's death metal playground, REPTILIAN DEATH's latest offering "The Dawn of Consummation and Emergence" features more of the same themes of preposterous hedonism and premeditated blasphemy. Only this time, there seems to more than mere deviance at work.

Hardly a cheerful endeavor when you have lyrics running to the tune of "That's how I like it! Do you like this? Turn you over. How do you like this? You're going to suck me and I'm going to cum all over your fucking face while you bleed". Almost makes you laugh even harder at Ozzy Osbourne's farcical (and tame by comparison) televangelist condemning heavy metal lyrics in the schlocky heavy metal horror flick "Trick Or Treat". The rest of "The Dawn of Consummation and Emergence" is chock-full of over-the-top sacrilege, all penned by Vinay Venkatesh, you find yourself guffawing less and less as the album spews on. To paraphrase the seventh track, the gory doings of REPTILIAN DEATH becomes one unnervingly perverted moment at the altar after another.

Too bad, since the "Alien"-meets-"American Godzilla" artwork on the cover by Michal "Xaay" Loranc indicates something subliminally fun in the audile content. Instead, the majority of "The Dawn of Consummation and Emergence" flies on a routine death grind plot, casting every malicious potshot against Christianity (specifically, 101 ways to defile the implied Virgin Mary) as can be crammed into this genuinely nasty joint.

Demonstealer engineers much of the instrumentation on "The Dawn of Consummation and Emergence" along with bassist Ashwin Shriyan and guest guitarist Kenneth Rego, who checks in with a couple of solos. As a result, there's a somewhat limited capacity to the execution of the songs where the drums, while mostly sharp, occasionally slip and upchuck along with Demonstealer's voluminous barfing. Without Shriyan gluing the bottom ends of Demonstealer's maniacal compositions, this album could've been a bit of a wreck.

Nevertheless, "The Dawn of Consummation and Emergence" is mixed rather well by Demonstealer. His engineering proficiency rescues the album from becoming a butcher job for all the wrong reasons. The album flies primarily on a death grind pace, while the guitars are often snazzy and blended with Ashwin Shriyan's thrumming bass lines.

The best moments of the album actually come in the slower sections of each song, as in the slithering final bars of "Now You Graze Upon Me", the winding last minute of "Unnervingly Perverted at the Altar" and the decorative intro to "Marvelous Gods – The Apple of My Eye", even if the latter turns into a sloppy chop shop that can be skipped over. The main chugs of "Stimulate, Hike, Impel, Tear" are given extra weight by scraping strums and buckets of bloody note dripping, while Shriyan follows along craftily with his guttural chunking.

One of the coolest guitar parts on the entire album comes with the VOIVOD-esque sweeps that momentarily quell the speedy havoc of "Inchoate". The deep-rooted tantalizing scales swimming incrementally on "Patchwork and the Art of Skinning" manages to briefly uncoil the inherent brutality of the track, which takes the time slow to an effective and shivery crawl. The top layer guitars in this sequence are quite superb.

Of the faster parts of the album, the best of Demonstealer's beasts come raging on "Soaked With the Imperfections of Puerile Blood", "Emerge, Hatred, Emerge" and the sordid rapefest, "Stimulate, Hike, Impel, Tear". The aforementioned guitars in "Stimulate" convey the unappetizing scene of vicious vaginal violation and demonic impregnation. It's a little scary so much structure and care goes into a song with such insidious overtures.

Of course, none of this should be considered new to any black and death metal vet. Still, the separation between mockery and entrenched nihilism used to be clear with Demonstealer's work in this outlet. Not so much anymore. "The Dawn of Consummation and Emergence" is strictly for antichrist junkies. Otherwise, heed the filthy caveats that come in REPTILIAN DEATH and approach at your discretion.