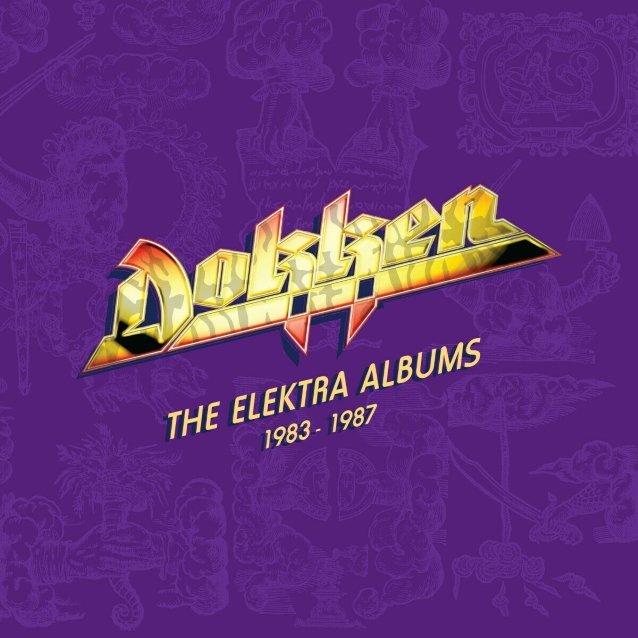 Disc 1: Breaking The Chains
Disc 2: Tooth And Nail
Disc 3: Under Lock And Key
Disc 4: Back For The Attack

Despite being regularly derailed by one of the most fractious relationships in music history, DOKKEN hold a special place in the heart of every '80s-obsessed metalhead. Immortalized via one particularly effusive endorsement during the legendary "Heavy Metal Parking Lot" documentary ("Heavy metal definitely rules! TWISTED SISTER, JUDAS PRIEST, DOKKEN, OZZY, SCORPIONS! They all rule!") they casually epitomized a sharp and radio-friendly strain of metal that only Ozzy Osbourne ever did better. On the rare occasions when frontman Don Dokken and guitarist George Lynch weren't trying to hit each other in the face, they made some unashamedly kickass albums, too. Reborn on glorious vinyl and housed in a snazzy, hardboard box, "The Elektra Albums" gives the first four DOKKEN records the love, respect and sonic oomph that they deserve.

Diehard DOKKEN fans will already know how much these four albums rule. Everyone else should probably start at the beginning. "Breaking The Chains" is simply a definitely '80s metal record, with Lynch blazing away throughout and Don Dokken serving up hook after gleaming hook, pop sensibilities on full display, but metal credentials equally indisputable. From perky pop-rock like "I Can't See You" to the full-bore, PRIEST-like bombast of "Seven Thunders", it's so evocative of 1983 that it might as well come with a free time machine.

Similarly, you can trace the evolution of production in mainstream metal through these albums. Both "Under Lock And Key" (1985) and "Back For The Attack" (1987) aspired toward the big-budget sonics that had propelled DEF LEPPARD to the top, with silky vocal harmonies and arena-ready extravagance built in as standard. Both contain some great moments — "The Hunter" (from the former) and "Night By Night" (the latter) particularly stand out — and cemented the band's reputation as major players, but DOKKEN's real moment of glory had come a year or two earlier.

Beyond essential for any student of '80s metal, "Tooth And Nail" is simply one of those albums that defies criticism through sheer force of era-defining majesty. Songs like the rampaging title track, the insanely catchy "Just Got Lucky" and the steely melodrama of "Into The Fire" showcased DOKKEN at the peak of their powers, with both frontman and lead guitarist on fire (ably supported, of course, by the perennially unsung Jeff Pilson and Mick Brown, on bass and drums respectively). Every song on "Tooth And Nail" is a cracker, and hearing them all again, on vinyl and cranked up to skull-threatening levels, is a joy. DOKKEN definitely still rule.