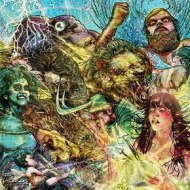 So it looks like the next big thing in tech-death hail from Santa Cruz, California and go by the name of SON OF AURELIUS. For a group of dudes that got together with the intention of being a recording project barely a year ago and not rounding out the lineup until shortly before recording their debut full-length late last year, this band is actually pretty damned impressive. In addition to SOA's ability to shred the ever-loving shit out of their instruments, they manage to squeeze some songwriting out of their shreddery; a feat often left unaccomplished in tech circles.

Far be it from me to get sucked into the spinning gears of a hype machine when it comes to a group of heavily pushed youngsters, but there's quite a bit about "The Farthest Reaches" to get excited about. In thirty-six minutes, SOA churns out eleven tracks of high-caliber, prog-infused, melody-injected tech metal that ranks right up there with releases from THE FACELESS and THE BINARY CODE. Guitarists Cary Geare and Chase Fraser (ex-ANIMOSITY) provide several moments of speed-addled fret wizardry, but also know just when to say when and break away into tuneful sections of melodeath or classically-inspired lead runs. While much of their faster stuff comes across much like ORIGIN or OBSCURA, depending on the situation, brief tempo shifts, off-kilter grooves and stop-n-go riffing not only prove effective, but also show a band intent on not being label as a clone of others playing this style. That being said, this is an album that falls solidly under the tech-death umbrella and there are a few familiar elements going on here. Vocalist Josh Miller, despite a skilled set of pipes that are capable of volleying between shriek and growl without a second thought, has a style very reminiscent of THE BLACK DAHLIA MURDER's Trevor Strnad and others that follow that path. Do his vocals work for the music behind them? Yes, very well, but if I had to pick one thing on this album that was "par for the course," this would be it.

Given that bassist Max Zigman spent time at Berklee, it's no wonder that "The Farthest Reaches" is mixed in a manner that sees him almost as predominately featured as the guitars. His somewhat rubbery and mid-rangy tone enables him to stick his neck out there, so to speak, without muddying up the mix when the BPMs are at maximum. The overall combo of tones provides for some very cool moments, especially on the doomy section of "Pandora's Burden". Drummer Spencer Edward is no slouch either with his feet of fury and rhythmic precision, I just with the inherent clickiness of his drum sound didn't cause him to get buried beneath the onslaught of guitars.

Obviously, tech-heads and fans of new-school death are going to go nuts about SON OF AURELIUS and it wouldn't surprise me to see them pick up more than a few fans from other walks of life along the way. I do, however, have to question whether or not the hurried way in which they lit up will cause them to be a flash in the pan. Complexly penned, yet listenable tunes like "Facing The Gorgon" and "Mercy For Today" lead me to believe that this is a band with the ability to mature and push the boundaries of tech to new places, but they do have a ways to go before they can completely break free from comparisons of their comrades. For now, I'm content with enjoying the hell out of the talent they've displayed thus far.