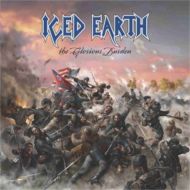 ICED EARTH mainman Jon Schaffer hit the heavy metal jackpot when he managed to convince former JUDAS PRIEST screamer Tim Owens to join the group's ranks following the departure of longtime singer Matt Barlow earlier in the year. Arguably the finest metal vocalist of the last decade, Owens' prowess was well documented on PRIEST's last two albums and in the live situation, where Tim quickly established a reputation for singing the Halford-penned material more faithfully and convincingly than Rob himself has been able to deliver it in years.

Much has already been made of this album's overtly patriotic overtones, possibly at the expense of some of the band's non-American fan base, which will undoubtedly take issue with Schaffer's pro-U.S. stance. Once you get past the album's concept, however, and delve deeper into the musical end of things, you will find a collection of songs that easily stand as some of the finest of Jon's career.

As has been the case with much of ICED EARTH's recorded output, Schaffer's trademark "galloping" riffing style is over-utilized and more than just a tad tired-sounding. To Jon's credit, however, his shortcomings in the riffing department are compensated for by Owens' stunning execution of the album's Schaffer-penned vocal melodies, which are more involved and stronger than anything the guitarist has ever written before.

Although there are still occasions where Tim sounds uncannily like Halford (take the verses of "The Reckoning", for example),his immense vocal abilities are used much more effectively here than they were during his tenure in PRIEST, with Owens finally getting an opportunity to prove once and for all that his true potential was largely untapped during his years with the British heavy metal legends.

In musical terms, "The Glorious Burden" is a diverse, multi-faceted effort that focuses mainly on up-tempo metal anthems while taking the occasional detour into mellower waters. The album's first video, "When The Eagle Cries" (which is featured here in a "full band" version rather than the acoustic adaptation that was used in the video and recently released single) is a glorious slice of melodic hard rock that — while unrepresentative of the album as a whole — undoubtedly stands as one of its highlights.

"The Glorious Burden"'s real "tour de force", however, is without question the "Gettysburg (1863)" trilogy, a 32-minute album closer that is as well executed as it is ambitious. Comprised of three sections that represent specific events that happened on each of the three days of the Battle of Gettysburg (from the struggle of General Buford, Colonel Joshua Lawrence Chamberlain's defending of Little Round Top, to Pickett's charge),this epic to end all epics features extensive contributions from the Prague Philharmonic Orchestra and, amazingly enough, manages to avoid buckling under the weight of its own self-importance. A true work of art.

Whatever opinion you may hold of Schaffer's political views or his unapologetically egotistical approach to inter-bandmember relations, "The Glorious Burden" is a true heavy metal fan's delight — an album that takes the listener on a long journey without ever betraying the essence of the band's sound or wavering in the song-quality department.

Here's hoping that the Schaffer/Owens collaboration is a long and fruitful one.