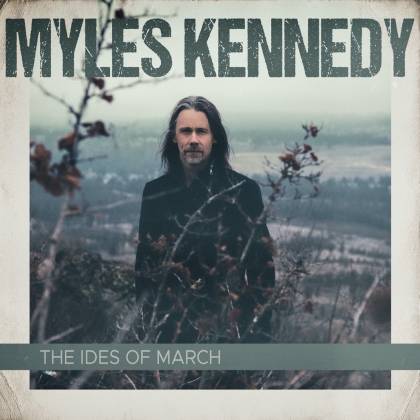 The Ides Of March

While still conquering all with both ALTER BRIDGE and SLASH, Myles Kennedy is steadily establishing his identity as a solo artist. Plainly one of the most significant voices in modern (hard-ish) rock, the Boston-born singer was never likely to veer off on some eccentric, experimental tangent, but there is more than enough clear blue water between his more high-profile hits and the songs on "The Ides Of March". In contrast with 2018's "Year of the Tiger", Kennedy's second solo record dares to inhabit hard rock territory, albeit with a strong blues influence and shiny, radio-rock vibes that certainly wouldn't fly in his day job(s).

It starts with a flurry of absurdly catchy tunes. Despite its corny sentiment ("Why can't we all just get along?"),"Get Along" is irresistibly upbeat and energized, with guitars to the forefront and Kennedy audibly snake hipped and hyped up. "A Thousand Words" and "In Stride" repeat the trick with bright, snappy and soulful arrangements that intermittently touch on something heavier, but with that soaring voice joyously pinning everything to the ceiling. In contrast, the title track is a rather ponderous and po-faced blues rock sprawl, with faintly Zep-like textures interspersed with an overtly overwrought chorus. Admittedly, Myles Kennedy can sell bombast better than most, and his vocal talents nearly rescue the whole thing from a tsunami of earnestness. "Wake Me When It's Over" is much better: a propulsive, summery singalong, with glorious vocal harmonies and a generous dose of Southern rock twang.

Blues rears its aged head again on "Love Rain Down" which, in the best possible way, sounds like something David Coverdale might have recorded in the '90s, but without the leering innuendos. Its languorous gait, twinkling acoustic guitars and melancholy atmosphere are this album's most exquisite backdrop for Kennedy's voice, and suggests that a deeper plunge into Americana's murky depths would suit him perfectly. Elsewhere, "Tell It Like It Is" is a slightly throwaway chunk of lurching country rock; "Moonshot" is a loping, swampy blues ballad with another giant chorus; and "Sifting Through The Fire" tips its hat to Tom Petty and will sound perfect blasting out of a convertible's car radio at the height of summer. With that in mind, the closing "Worried Mind" feels like an unnecessary switch back to slow-coach blues and lacks the melodic incisiveness of earlier, like-minded efforts. The wonderfully breezy and hopeful "Wanderlust Begins" would have been a far more effective parting shot.

A much more diverse and dynamic affair than his solo debut, "The Ides Of March" will thrill the faithful and ensure that the Kennedy's star remains firmly in the ascendant.