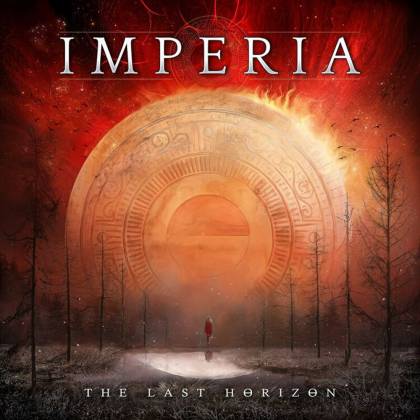 With the likes of NIGHTWISH, WITHIN TEMPATION, EPICA and BEYOND THE BLACK doing big and even bigger things, symphonic metal hardly needs an injection of fresh blood at this point and is doing far better than anyone could have predicted 25 years ago. But even though logic dictates that there is only so much room at the top, IMPERIA have become increasingly impressive over the years and, with "The Last Horizon", now sound very much like heavyweight contenders.

Neither in thrall to the pop-metal detours of their high-profile Dutch peers, nor to the classic, textbook symphonic metal bombast, the band's signature sound incorporates everything from brooding, PARADISE LOST-style gothic chug, to flat-out musical theater euphoria, but with robust melodic sensibilities and the ludicrous vocal talents of Helena Iren Michaelsen holding everything together. Married here to some of the best songs IMPERIA have penned to date, it's a formula that loudly blurs the line between familiarity and originality, quite possibly bringing the ceiling down in the process, such is the floor-disturbing oomph ingrained in its crystal-clear production.

Michaelsen is the star of the show, as ever, and it's her death-defying versatility that sells these songs as she switches from pure and gently soulful to spiky and rough-hewn, before (nearly always) transforming into a powerhouse soprano for those all-important crescendos. She's an absolute powerhouse throughout "The Last Horizon", bringing sweetness and disarming clarity to the melodic rock thud of "Where Are You Now" and a sense of overwhelming drama and dream-like wonder to "My Other Half". On the heavier, crunchier likes of opener "Dream Away" and the dark and doomy "To Valhalla I Ride", IMPERIA bring an old-school succinctness to bear on otherwise rich and multi-layered material, with Michaelsen audibly reveling in the bluster. Even better, "I Still Remember" is a gleaming colossus of a power ballad: embellished with wistful, folk-tinged ephemera, blessed with a Herculean chorus and delivered with stately force, it's a jaw-dropping showcase for the singer in particular. Elsewhere, "I Send You My Love" delivers a genuine curveball, mutating from skittering electronics and a glowering, sub-bass pulse to reverb-drenched piano reverie.

Six albums in, IMPERIA have more than earned the right to scuttle up the symphonic metal ladder a rung or three. "The Last Horizon" delivers the goods while setting this band apart from the overblown pack in lots of subtle and enticing ways.