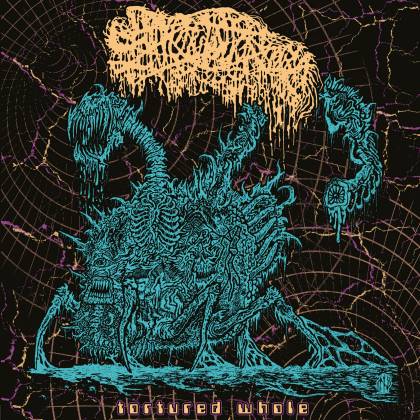 Proponents of death metal — including musicians, fans and everyone in between — have a tendency of taking themselves too seriously. Sure, a serious demeanor and outlook go hand in hand with some of the darker and occult-obsessed bands, but when many take the grimacing look and spirit to an extreme, the try-hard nature actually backfires. On the flip side, joke bands might be funny the first time around, but once you've heard the joke, it's not funny the second time. Midwestern upstarts SANGUISUGABOGG strike an interesting balance, however. The gore-obsessed death metallers are openly having a good time, and their over-the-top themes are oftentimes tongue-in-cheek. And yet their music is cleverly constructed, significantly unique, and most certainly memorable. The act's debut full-length, "Tortured Whole", is likely to make waves across the extreme metal underground globally.

Death metal bands mystique was facilitated back in the day by their names traveling across the pages of fanzines, "proper" print magazines, tape trading and then with webzines at the onset of the internet. But with the internet snowballing its way through and over every avenue of life, the mystery of death and black metal bands was destined to history. SANGUISUGABOGG have fully embraced the fact that technology allows us to listen to and read about bands while scrolling through our smart phones. Balls deep in social media memes, their frontman, Devin Swank, has even been open to lyrical and song title input from fans via his Facebook page.

MORTICIAN may be one of the best reference points in that SANGUISUGABOGG similarly forwards a down-tuned, horror-obsessed death metal that includes extremely low vocals, evidenced as early as the lyrically and musically disgusting opener "Menstrual Envy". But there is much more at hand. The riffs are decidedly inclined toward classic American death metal bands, while the delivery is much more contemporary, and in many ways comparable to slam. Founding guitarist Cameron Boggs actually cites Memphis hip-hop as the source for the band's groove-oriented tendencies, a quality that's definitely evident early on the track "Gored In The Chest". The Ohio band's appreciation of nineties American death metal shines through as the song progresses with a mid-tempo surge setting the stage for swirling riffs that should satiate old-school death metal fans.

Interludes like "Pornographic" fit into the album's sound and sequencing, providing much needed breaks within the bludgeoning that would otherwise feel too monotonous, relatively speaking. The rhythm section, drummer Cody Davidson and bassist Ced Davis, provides a solid foundation throughout. Davidson proves himself to be the album's anchor, guiding the band with his fluid tempo shifts that entirely turn the course and provide a dramatic appeal on songs like the title track and the eloquently entitled "Dick Filet".

SANGUISUGABOGG is the next big thing in death metal. They aren't necessarily doing a lot that we haven't heard before, but their presentation and delivery of familiar sounds is unique and expressed with a passion that's contagious. "Tortured Whole" is the breath of fresh air that death metal needed. This isn't DEICIDE circa 1990, but for fans of brutal death metal of any era, "Tortured Whole" is an absolutely savage album that's worth digging into.