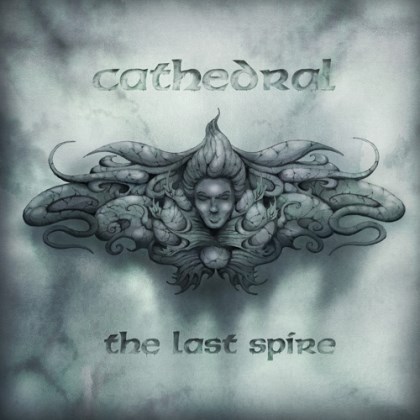 Full disclosure: this writer believes CATHEDRAL's final studio recordings - collected on 2013's suitably named "The Last Spire" - arrive not a minute too soon, following a frequently dissatisfying, deeply inconsistent, even occasionally embarrassing series of LPs released by the storied British doom band over the past decade.

But with "Spire", even these sporadic blunders can be forgiven thanks to a strong collection of songs cherry-picking quality ingredients from the length and breadth of CATHEDRAL's career rather than focusing all its energies on, say, trying to out-sloth "Forest of Equilibrium", out-groove "Supernatural Birth Machine" (God forbid),or freak the fuck out with precocious senility a la "The Garden of Unearthly Delights" (see "The Garden", or better yet, DON'T!).

If anything, "The Last Spire" most resembles CATHEDRAL's seminal sophomore album, "The Ethereal Mirror", IF it were enhanced with (but never overwhelmed by) the subsequent years' experiments into different sounds and musical styles?but obviously there's more to it than that.

From the very start, vocalist Lee Dorrian helpfully establishes the album's funereal tone as he repeatedly recites "Bring out your dead" with zombie-like focus over the tolling bells, cawing crows and thrumming feedback underscoring the aptly named "Entrance to Hell".

Then, the twelve-minute-long "Pallbearer" follows the meanest fucking riff of the year with alternating doses of dragging, galloping, and even acoustic guitars from Gaz Jennings (backed with placid Mellotron),before making room for guest vocals from PURSON's Rosie Cunningham - further sign of the hybrid fusion of traditional/innovative sounds in store throughout the album.

Sure enough, in what duly proves to be a glorious bummer of a farewell party, the ensuing "Cathedral of the Damned" briefly interrupts its merciless grinding riffs for twinkling chimes and crusty death vocals courtesy of AUTOPSY's Chris Reifert; "Tower of Silence" unfolds like psychedelia's worst nightmare (and doom fans' cheeriest dream); and the spectacularly named "Infestation of Grey Death" lumbers into view (and stays there quite a while) thanks to snail-like tempos that would put most drummers to sleep, if not for its eventual, compelling dynamic change-ups.

Later, a mournful cello ushers in one of the album's most interesting numbers, "An Observation": a song as cohesively adventurous as the aforementioned "The Garden" was not, thanks to numerous hard/soft passages shadowed by creepy haunted house organs (courtesy of one David Moore) that suddenly stop on a dime so the band can embark on a Moog-fueled excursion.

All that's left now is for CATHEDRAL to have "The Last Laugh" (literally, a short laugh-track interlude that escalates to screams of pain) ahead of their presumptive studio farewell that is closing number, "This Body, Thy Tomb", which reels back the experimentation to flighty flutes and lapping water midway through so as to wind down Dorrian and co.'s career on a fittingly puritanical doom note.

So it's official: even this grumpy old scribe can admit that CATHEDRAL pulled themselves together I almost heroic fashion to go out on top - or, perhaps more accurately, in the deepest pits of doom - worthy of their seismic contribution to heavy metal's slowest branch over these past two decades.

Now, as Ronnie James Dio would have put it, it's time to "fade away?"