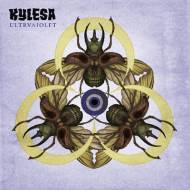 Officially, "Ultraviolet" is KYLESA's first new studio album in three years, albeit it certainly seems a much shorter time than that, given last year's "From the Vaults, Vol. 1". The latter felt more like its own beast than a collection of outtakes and revamps. Thus it's hard to come to their newest work without a sense of prejudgment and, to be frank, expectation.

On the one hand, KYLESA hit such a stride on their previous two albums, "Static Tensions" and "Spiral Shadow", the band has set its own bar. On the other hand, it could be argued that the time spent assembling and tweaking "From the Vaults, Vol. 1" could've potentially played a foil in work coming out so soon thereafter.

"Ultraviolet", simply put, is a grower. It doesn't bust loose like a ragin' Cajun as did their previous two full-lengths. There's a certain bit of repetition to the first half of "Ultraviolet" that calls up previous ideas culminated from the band's earlier days. Just as there are, at times, reflective swamp rat sludge motifs that come bred automatically to the Savannah sludge troupe. If the dirty boogie of "Grounded" comes off like a brackish shade of THE SWORD, DOWN and ALABAMA THUNDERPUSSY, it's probably no mistake.

It takes KYLESA six songs to generate some genuine acceleration with the PIXIES-esque "What Does it Take". "Ultraviolet" requires patience and attentive ears to all of the distortion layers, four-corner quadraphonic echo effects and random twin percussion rumbles through the first five cuts. "Exhale", "Unspoken" and "Long Gone" are so drenched with details they demand repeated listens in order to soak them up.

A dynamic slow-cooker at-large, "Ultraviolet" later delves into sonic impressionism and alt textures versus blunt aggression. Loud when they want to be, KYLESA jacks up the volume on "Long Gone", "Exhale", "What Does it Take" and "Vulture's Landing". On the opposite end of the spectrum, "Steady Breakdown" is scaled back into a lazy shuffle that allows Laura Pleasants (who is given much of the album to field vocally) to drawl soothingly while the band creates a cocoon of translucence in the solo section. True to its namesake, the song takes an ugly curve in the abbreviated outro that's halted so abruptly you're either going to cheer or groan at such artistic bravado.

In many ways, "Ultraviolet" becomes KYLESA's escape into alternative rock, evidenced by a swooning, Eighties-era U2 ether prevailing over "Low Tide" and the SIOUXSIE AND THE BANSHEES feel of "Unspoken". Still metal in nature, the stepped-up "Vulture's Landing" carries a subliminal BREEDERS feel to the verses and not just because Laura Pleasants pulls a pretty nifty tweak of Kelley Deal. The reverb-filled "Quicksand" is smothered by ear-splitting aeronautics in the style of SONIC YOUTH even while keeping a low-end groove grinding beneath. Finally, the breezy closer "Drifting" rings like a collision between "Seven Seconds"-era CURE and later in the song, early years JUDAS PRIEST.

While we're still waiting for KYLESA to release the hounds with their two drum attack (used with less theatrics this round),what "Ultraviolet" offers the band's listeners is a skilled overview of their capacities beyond sheer bludgeoning. One of the most talented units in today's metal underground, KYLESA offers their listeners a challenge this time and the rewards unravel with repeat plays. "Ultraviolet" is a fascinating ride if not the most ferocious trip this band's mapped out. Phillip Cope primarily taking a back seat to Laura Pleasants on the mike is a humble gesture and for this album's purposes, it was the right move. Together, they're lethal on "We're Taking This". Yet Pleasants is the star attraction on "Ultraviolet" as the band at-large seeks growth from themselves. KYLESA pays out in large chunks for those who remain vigilant, even if there's proof in the pudding this band hangs on its own cloud.