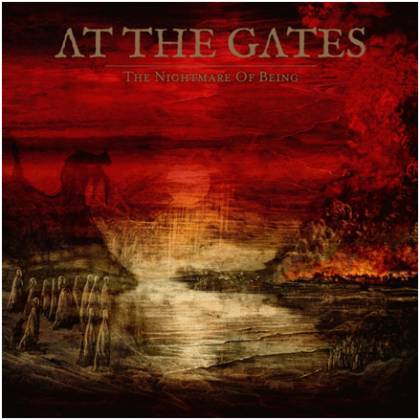 The Nightmare Of Being

01. Spectre of Extinction
02. The Paradox
03. The Nightmare of Being
04. Garden of Cyrus
05. Touched by the White Hands of Death
06. The Fall into Time
07. Cult of Salvation
08. The Abstract Enthroned
09. Cosmic Pessimism
10. Eternal Winter of Reason

The eternal challenge for a legendary band is to convince fans, both old and new, that new material is intrinsically more exciting and interesting than cherished relics of the past. That may be especially true for AT THE GATES, such is the unassailable status of "Slaughter of the Soul", the band's classic 1995 album and a perfect encapsulation of melodic death metal's fiery power. However, since reforming in earnest for 2014's "At War With Reality", the Swedes have continually demonstrated that "Slaughter…" was really a super-condensed and streamlined reduction rather than the full picture. From the warped grimness of early records like "With Fear I Kiss the Burning Darkness" through to the darker, more adventurous depths of "At War…" and its vicious follow-up, "To Drink from the Night Itself", AT THE GATES have always had a progressive and subversive streak, and their seventh full-length album feels like its most strident and fearless expression yet.

This is a magnificent piece of work, both lyrically and musically. The album's core theme centers on the Philosophy of Pessimism, inspired by the thoughts and musings of controversial philosophers like Schopenhauer and Zapffe and supernatural horror authors like Thomas Ligotti and John Padgett. Fervently poetic, Tomas Lindberg Redant's channeling of these often psychologically bruising ideas would be impressive and immersive enough on its own, but AT THE GATES have simultaneously produced ten songs that are as musically riveting and deathly serious as the subject matter demands. To pull the lyrics apart here would be pointless (and very time consuming): in truth, this is an album that demands to be absorbed at length and in great detail.

Not that "The Nightmare of Being" represents some radical departure from AT THE GATES' classic sound. The likes of opener "Spectre of Extinction", recent single "The Paradox" and the rampaging, grime-encrusted "Cult of Salvation" contain more than enough of the band's scything, hyper-metallic trademarks, but everything feels more expansive and sonically nuanced than before. This is also an album rich in brain-juddering curveballs. There's the simply astonishing "Garden of Cyrus", wherein AT THE GATES conjure an unprecedented strain of barbarous, angular prog, replete with a spiraling, sonorous saxophone solo; there is the epic, claustrophobic melodrama of "The Fall Into Time", which redefines the notion of symphonic metal while sounding like an irresistible summoning from the abyss; and then, most remarkable of all, there is "Cosmic Pessimism", a collaboration with author and academic Eugene Thacker, with lyrics plundered from his book of the same title set to a tooth-rattling Krautrock groove, and with a bizarrely uplifting chorus of "Pessimism! The last refuge of hope!" Elsewhere, sharp ideas, daring detours and miraculous, multi-layered arrangements are omnipresent, all deftly assimilated into some of the most unrelenting and gnarly death metal imaginable. From the title track's eerie pomp to "Eternal Winter of Reason"'s pitch-black, slowly mutating final descent, every last moment speaks of a great band growing in confidence and strength, both as songwriters and as enemies of conformity.

Of course, there will always be a section of the AT THE GATES fan base that will point to an album from 1995 as the band's best. But armed with open eyes and ears, the thumping realization that "The Nightmare of Being" is both the most powerful and substantial record the Swedes have made and the finest metal record of 2021 is pretty much unavoidable.