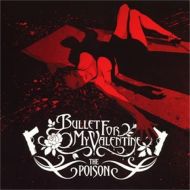 BULLET FOR MY VALENTINE

Well, this is a first, receiving a promotional CD in a red heart-shaped box, that is. That and a Valentine's Day release date can only mean one thing, right? It's the new full-length album by Welsh metalcore outfit BULLET FOR MY VALENTINE. Phrases like "the next big thing" have been waved around more than a gold Pittsburgh Steelers towel in Detroit during Super Bowl weekend. "The Poison" has all the trappings of a made-for-MTV breakout hit. I'll gladly acknowledge the hardy riffage and Swede-infused twin-guitar fire of guitarist/vocalist Matt Tuck and guitarist Padge, made deliciously crisp and crunchy by Colin Richardson's expert production. The axe work can be vicious at times. As for the album as a whole, there is some good and some not so good.

After the aptly titled instrumental "Intro" (featuring the cellos of APOCALYPTICA),the album follows with several "hey, it's predictable, but pretty rocking" moments. I rather enjoyed the tough, harmonic-peppered, licks of "4 Words (To Choke Upon)", regardless of the fact that I've heard the mix of clean and shout vocals on the chorus many times before. "Her Voice Resides" is an infectious rocker too. The standard IN FLAMES guitar harmonies and meaty riffing is present throughout, the best of which is heard on "Suffocation Under Words of Sorrow (What Can I Do)". Though the light/emotional verse that builds to a tough gallop and ultimately a pedestrian clean chorus on "Tears Don't Fall" is expected, the twin lead work, thrashy romps, galloping tempos, and a hot solo launch the track out of mediocrity.

By the time the album's second half rolls around the material becomes a little too predictable (or maybe I just get tired of it),as evidenced by the middling fare of "10 Years Today", "Cries in Vain", and "Spit You Out". Incorporating some "whhhoooooaaa" harmonizing in "Hit the Floor" (with production and mixing assistance from Andy Sneap) and "Room 409" is a nice idea, but ends up only marginally distinguished. The mellow acoustic verse and heavy melodic chorus of "All These Things I Hate (Revolve Around Me)" is a throwaway that will probably score the band a hit. An overly long album-closer called "The End" features a mellow/melancholy lightness that builds to heavier territory, calms back down, and builds again. The break for a little up-tempo chug and guitar harmonizing is moderately effective, but hardly awe-inspiring. In short, it's a forgettable seven minutes.

BULLET FOR MY VALENTINE is fairly good at what it does and at least half of the songs are better than average. There is just something about the disc that feels contrived; in a genre that's been run into the ground, that can be problematic. The one certainty is that "The Poison" will go over a storm with the poor huddled (Hot Topic) masses.