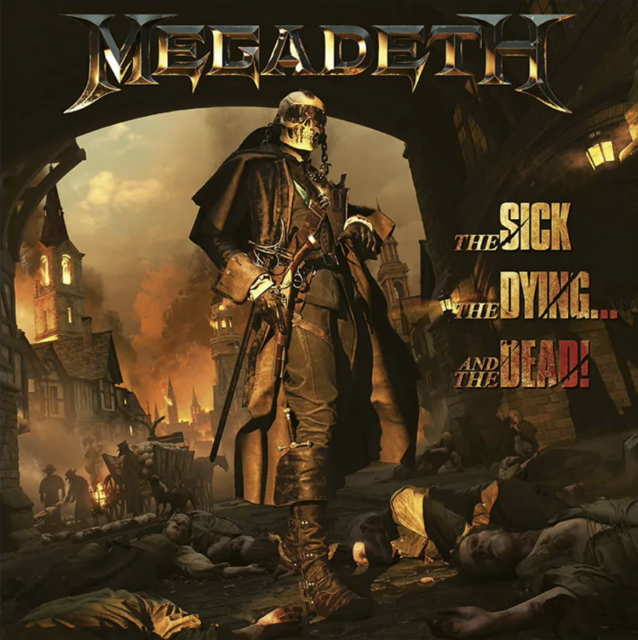 The Sick, The Dying… And The Dead!

It should have been obvious from the huge twinkle that has recently started to inhabit Dave Mustaine's eye that MEGADETH's 16th album was destined to be a really good one. Recent preview singles "We'll Be Back", "Nightstalkers" and "Soldier On!" confirmed it beyond doubt, of course, but it wasn't so long ago that Mustaine's band seemed to be operating on shaky ground. Fortunately, the departure of Dave Ellefson has made not a single dent in MEGADETH's armor. The peerless Steve Digiorgio stepped up to record bass parts for this record, which means that the quartet showcased on "The Sick, The Dying… And The Dead!" is as officially badass as any in the thrash legends' history, with the uplifting presence of guitarist Kiko Loureiro and drummer Dirk Verbeuren completing the lineup.

Being the kindly gentleman that he is, Mustaine has made a point of highlighting Verbeuren's overall impact on MEGADETH in particular, frequently comparing him to late, great Gar Samuelson. It is undeniable that from the opening riffs of its title track, this is an album that swings, scythes and flat-out rips like nothing they have done since the very early days. On "We'll Be Back" and the profoundly snotty "Life In Hell" in particular, Verbeuren's rabid drumming strips decades off MEGADETH's collective age.

All of this would count for nothing if the songs failed to make the grade, but "The Sick, The Dying… And The Dead!" is immediately identifiable as top-notch 'deth. The title track is a warped and fractious paean to the days of the Black Death, with a woozy mid-song detour, an absurd number of great riffs and Mustaine on deliciously creepy, close-to-the-mic form. Thereon in, this is an absolute feast for MEGADETH devotees, old and new. The epic "Nightstalkers" features a swaggering cameo from Ice-T and harks back to the progressive grit of "Rust In Peace". Similarly, "Dogs Of Chernobyl" is a dark, destructive sprawl of riffs and macabre imagery, propelled along by Verbeuren's fluid but ferocious battery. Both "Junkie" and "Killing Time" are studies in sneering viscera: the first, a sardonic snipe at all manner of addictive behaviors; the latter, a brutal take-down of some unnamed target of Mustaine's opprobrium. This, it has to be said, is what we want from a MEGADETH record.

The excellence continues to the bitter end, too. "Soldier On!" is an irresistible anthem with a chorus so big you could stick a flag in it and declare independence; "Sacrifice" is a richly textured, gothic thrash gut-punch; "Mission To Mars" pitches Mustaine as a wannabe space-traveler, over a powerhouse, four-to-the-floor attack, before a bewildering, syncopated tangential shift injects yet more adrenalin into the whole metal-as-fuck enterprise. And for those of us that never tire of hearing Dave Mustaine's undiluted disdain dripping from our speakers, the fiery "Célebutante" is an absolutely top-tier treat with a heart of purest old-school speed metal.

See that twinkle in his eye? That means that Dave Mustaine is well aware of how lethal MEGADETH are, circa 2022. This is easily the band's best album since "Endgame"… possibly even "Countdown To Extinction". The cantankerous old devil is back in blistering top form and making music that will remind you exactly why we love the cantankerous old devil in the first place.