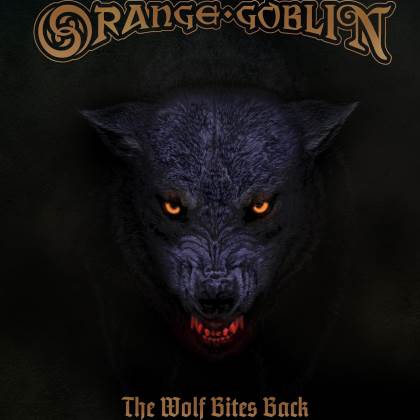 The Wolf Bites Back

It is inevitable that any British heavy metal band with even a hint of stoner rock or doom metal leanings will have the name of BLACK SABBATH invoked in press descriptions. And yes, there are many musical parallels — both in terms of style and songcraft — that can be drawn from veteran rockers ORANGE GOBLIN to the genre’s originators. But what makes ORANGE GOBLIN stand out from the literally hundreds of bands that have aped the blueprint, is that few have mastered the craft of being an all-around complete package of a band in all member positions as much as it has.

As the original BLACK SABBATH lineup was built on four equally mighty pillars of heavy metal power, so too is ORANGE GOBLIN. Now more than twenty years without a single lineup change, the chemistry between Ben Ward (vocals),Joe Hoare (guitars),Martyn Millard (bass),and Chris Turner (drums) is what keeps ORANGE GOBLIN's blend of heavy biker-rock fresh on the group’s ninth record, "The Wolf Bites Back".

If the band name is familiar to you, you already know that ORANGE GOBLIN excels at meat-and-potatoes, comfort-food heavy rock. Ward's gruff vocal shouts and occasional bluesy croons propel hard-driving, heavy-rumbling, groove-laden riffs that are backed by one of the tightest rhythm sections in all of rock music. This has been the band's formula from its 1997 debut, "Frequencies From Planet Ten", but at this stage, the benefit of the years together is apparent musically from start to finish. "The Wolf Bites Back" is a tight forty minutes of anthems that would play well in the arena or in the pub.

From the very start of the record, ORANGE GOBLIN locks back into the groove it has set for itself fairly easily. Opening tracks "Sons of Salem" and the title track ease the listener in with comforting — if not challenging — bangers, and for the most part does not stray from formula. When the formula is executed so well though, that is not a bad thing at all.

Much as Tony Iommi, Geezer Butler, and Bill Ward did during the original BLACK SABBATH run, Hoare, Millard, and Turner carry equal weight in delivering ORANGE GOBLIN's infectious rockers. Very rarely are the band's musicians brought up in discussions and listicles of the genre's greats, but their performances on this record make a strong case to overturn the underappreciation. Hoare's guitar riffs are the perfect mix of heavy thunder and bluesy warmth that typifies the best of the genre. Millard's bass performance underpins the record with a heavy rumble, while every snare hit from Turner snaps with urgency.

That's not to say there aren't moments of slight deviation from the overall sound to keep things a little interesting. The first half of "Swords of Fire" is a moodier dirge, with perhaps the best example of the power of Millard's bass work on this record. "In Bocca Al Lupo" is a psychedelic instrumental interlude that would have been a perfect close to the A-side of a heavy '70s rocker, followed up by "Suicide Division", a two-minute burst of punk/hardcore fury.

But for the most part, ORANGE GOBLIN sticks to the tried-and-true. While it is exciting to see acts develop their sound throughout a career arc, the bands that find their way quickly and stick to what they do well are equally important to the heavy metal scene. When an ORANGE GOBLIN album pops up on a release calendar, you are guaranteed at least one killer record coming out that month.