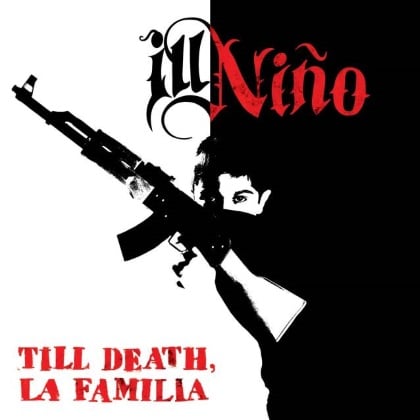 Latin metalcore posse ILL NIÑO are back for another round and it's to their credit they've let nothing stand in the way of doing what they want to do, whether that finds favor or not with the metal public at-large. This time, Dave Chavarri, Cristian Machado, Ahrue Luster, Diego Verduzco, Lazaro Pina and Oscar Santiago go the extra mile to dress up what is at this point, an agro-melodic formula tailored for their loyal followers.

Off the bat, ILL NIÑO tries a new trick with the pop-flavored "Live Like There's No Tomorrow". Electro sweeps and occasional pianos accent the tuneful anthem. Oscar Santiago whips out percussion rolls behind Dave Chavarri's slamming beat while Cristian Machado croons pleasantly along. Really, only the dirty part about this song is the litany of f-bombs dropped all over the otherwise hummable choruses.

ILL NIÑO again tinkers with EMD-kissed keys for the opening and throughout the heavier (though no less melodious) "Not Alive in My Nightmare", also featuring some of the faster grooves the band has put down in their work. Machado, who can swap tones in his sleep, screams and croons back-and-forth during the number. There's still plenty of room for the band to squeeze in harmonious choruses to offset their crunchier moments, but the track's best point comes with a heated blast of percussion from Oscar Santiago.

"I'm Not the Enemy"'s biggest strength is the dancing bongos that hang through most of the number. Over the years, ILL NIÑO has progressively embraced the trad-Latin component that gives them character and the mostly straightforward plugs of "I'm Not the Enemy" invites those supplemental rhythms to spice it up considerably.

The tick-tocking and waving synths to "Blood is Thicker Than Water" will raise a few brows. Cristian Machado charms this song with a delightful serenade, straight down to his sing-along whoa-ohs as part of the choruses. Thus the chopping riffs on the cut become secondary. This drastic changeup is very much welcome since Machado's passionate crooning pushes the song's appeal beyond its chugging infrastructure.

Every metal band that throws a quantified softie onto their albums automatically follows up with something louder and heavier, as if to excuse themselves. That comes on this album with the rapid, booming verses of "Are We So Innocent". Despite the primarily fast crunch of this number, expect an interrupting breakdown followed by sugary choruses, by now the prototype to ILL NIÑO's songwriting scheme. As with "I'm Not the Enemy", a decorative flamenco section puts the song onto another level before charging like a bull to the finish line.

Machado transitions from spoken word to half-singing during the first minute of "Pray I Don't Find You" amidst a singular guitar line, before the rest of the band joins in and pogoes the track with a jump around tempo accented by knifing congas. Unlike the songs preceding it, there's no cheery chorus on "Pray I Don't Find You", but there is a killer guitar solo from Ahrue Luster that sets up another chant by Machado leading into the song's banging finale.

The remainder of "Till Death La Familia" rolls through profane, tirade-driven verses perched on the edges of metalcore-driven modes, all as set-ups to appositely pleasing choruses. "My Bullet", however, is one of the more chilling songs this band has written as ILL NIÑO lobs a hefting tempo behind their denunciation of thug life. It's what we need more from the music community: condemnation not celebration of criminality.

ILL NIÑO are set snugly within their script and they have a devoted audience they cater to. Their repetitiveness is a detriment, but the modifications they employ on "Till Death La Familia" gives them substantially more charisma. The percussion and external elements being allowed to breathe so much on this album serves the main parts instead of finding themselves alienated. They organically lift ILL NIÑO's music to the height it was meant to be since their conception. Anti-metalcore listeners will find nothing here to chew upon, but nevertheless, ILL NIÑO gives a lot more to this album than they have in the past. As a result, more than just a little of "Till Death La Familia" sizzles.