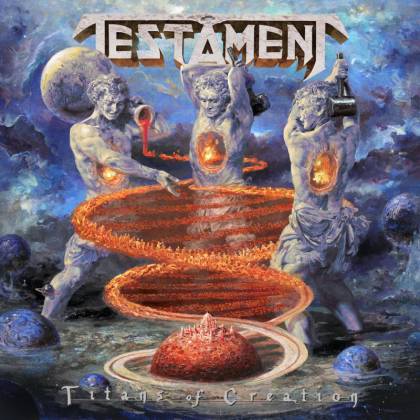 What the world needs now is a comfort-food thrash record that is big, dumb and absolutely killer. Sure, there are plenty of newer bands capable of generating that sort of din. It is exponentially more satisfying when that essential thrash record is put out by established genre greats. TESTAMENT long ago established why they are the answer to many inquiries regarding the best thrash band that is just outside "Big Four" status. While they have shown on previous records that they are capable of more ambitious songcraft, there is still something refreshing about the band utilizing their veteran presence and capabilities to produce a well-executed assault of relatively basic thrash metal.

TESTAMENT wastes no time making their intentions clear on their latest record, "Titans of Creation". There are no overindulgent extended intros and there is zero wasted motion to be found. The album launches with "Children of the Next Level", a catchy and forceful thrash anthem that sees Chuck Billy leading the band's charge with his trademark vocals snarls. Guitarist Alex Skolnick also uses the opening track as an opportunity to immediately show off that he is in super-shredder mode with his solos throughout this record. He has long been rightfully revered for his guitar work, but this time around there seems to be a stronger sense of urgency and speed with almost every moment he unleashes here, at least comparatively to more recent albums.

The trends established in the opener are continued throughout the first third of the record. "WWIII" begins with a more Teutonic display of pounding before settling into another anthemic thrash approach. "Dream Deceiver" comes off as the best candidate for remaining in the band's set list moving forward, with bassist Steve DiGiorgio and drummer Gene Hoglan anchoring the track with vigorous performances. "Night of the Witch" has an underlying buzz saw-rhythm riff from guitarist Eric Peterson that is a bit more angular, while maintaining a steady groove, which makes the track another prime candidate for breaking the pit open on upcoming live shows.

The middle section of the album gets a bit moodier and sees the band slowing down a little bit. A heavy metal song about serial killer Richard Ramirez (aka "The Night Stalker") may not exactly win awards for groundbreaking lyrical content in 2020, but "City of Angels" is an engrossing track bolstered by Billy shifting his vocals over to a more haunting rasp, DiGiorgio's administering his finest bass performance of the album, and Skolnick branching out and showing off multiple facets of his guitar abilities. "Ishtar's Gate" starts off with another ominous bass intro from DiGiorgio before shifting back into a thrasher that features the album's most purely dazzling solo from Skolnick, and "Symptoms" is another fine mid-tempo stomper.

The pace picks back up in the final third of the record, with more great solos from Skolnick, pounding drums from Hoglan, and venomous vocal delivery from Billy. The task presented through the final moments of the record by TESTAMENT to their fans is to bang their head to some heavy thrash, though "Code of Hammurabi" does break from the pack somewhat with a slight neoclassical flair.

While TESTAMENT has in the past shown to be capable of much more in terms of lyrics and songcraft, the fact that the band is using their power in 2020 to simply put out a killer thrash record full of songs about well-worn topics such as World War III, serial killers from a generation ago, and the Heaven's Gate suicide cult is comforting and very welcome.