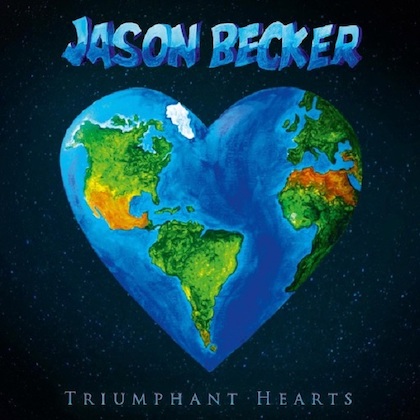 Some of you reading this will know the name Jason Becker through his work in CACOPHONY, and his guitar and songwriting contributions with David Lee Roth and Marty Friedman. Additionally, you also might've seen the movie "The Theory of Everything", which painfully illustrates the physical debilitation of theoretical physicist Stephen Hawking, one of our time's most celebrated critical thinkers. Hawking suffered from the motor neuron disease amyotrophic lateral sclerosis, commonly known as Lou Gehrig's disease, which is the same disease that Becker suffers from. If you're familiar with Hawking's trials and the retinal response system he was later able to communicate with, then you have a firm appreciation for what Jason Becker has likewise endured.

Diagnosed with ALS in the early nineties, Jason Becker was given three years to live. He we are, coming in to 2019, and Becker is not only defying his life expectancy with a vengeance (check out his bio film, "Not Dead Yet"),he's generating music by using only his eyes to interface with software created by his father. If you're a musician, picture yourself with full command over your limbs. Even with full command of one's faculties, the songwriting process is often a torture of the damned. Imagine, then, having the wherewithal, much less creative intellect, to complete the heaping set of dynamic tracks comprising Jason Becker's latest solo recording, "Triumphant Hearts", all while saddled with ALS.

To bring his writing to life, Becker employed a cream-of-the-crop guest list, including Marty Friedman, of course, plus Steve Vai, Trevor Rabin, Joe Satriani, Neal Schon, Joe Bonamassa, Uli Jon Roth, Greg Howe, Chris Broderick, Jeff Loomis, Steve Hunter, Gus G, Paul Gilbert, Steve Morse and Richie Kotzen. Many of these esteemed artists converge as part of a "Magnificent 13" on the smoking Old West epic, "Valley of Fire". The monster succession of guitar theatrics to behold there aside, this is still not all too heavy of an album. In this case, who cares about heavy! "Triumphant Hearts" is often an orchestral showcase of a creative mind delving cinematically through feudal Japan, Gaelic highlands and dream-driven calliopes. Electric guitars are invited to sample and savor Jason Becker's vastness, not merely supplement what becomes a divine and encapsulating listening experience.

Marty Friedman gets first turn on the title track, brought to a lush sparkle via strings and oboe. It takes most of the composition before Friedman emerges, but when he does, his part strikes such a teary climax you'd be a hopeless pessimist not to be moved. Codany Holiday gives voice to Becker's wrenching confessional "Hold On To Love". Projecting the depths from which Becker reaches into his soul to offer his fans personal insight, Holiday wrings his assigned words along with a gospel choir, pushing on high towards ordainment by the music gods.

The dazzling wonderland Becker creates behind "Fantasy Weaver" is brought to life through strings, reeds, harp, xylophone and the most impressive tones plucked from a ukulele by Jake Shimabukuro. Becker brilliantly casts meditative winds of Japanese Shinto into "Fantasy Weaver", concocting a forevermore West-meets-East neoclassical masterpiece. It leads into the verdant lullaby, "Once Upon a Melody", and later, the flamenco-earthed romanticism of "Magic Woman", highlighted by outstanding performances from Chris Broderick and Uli Jon Roth.

Steve Knight assists on the funk-bombed shakeup of "We Are One", where the guitars rail wilder than the Steven Tyler-esque vocals. If Prince and AEROSMITH had ever cut a blues-funk pumper for kicks, "We Are One" is where that merge would no doubt hit. Right behind is a jovial, if hippie-reverential reinterpretation of Bob Dylan's classic "Blowin' in the Wind", arranged as if Yusuf Islam, a.k.a. Cat Stevens, had taken it on.

Joe Satriani leaves his undeniable imprint all over the blues lollygag on "River of Longing", ingeniously reprised with both twang and progressive spiral by Trevor Rabin. Stylistically, Rabin wins the day. Jason Becker waits toward the end to drop a chop-filled rocker, "Taking Me Back", which would've settled nicely as a bonus cut for David Lee Roth's "A Little Ain't Enough", plus a chunky blues jam, "Tell Me No Lies".

This is one of the most refined, expressive and, holy hell, glorious albums. Calling Jason Becker an inspiration is simply cheating.