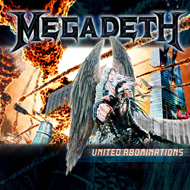 MEGADETH's 2004 album "The System Has Failed" might not have persuaded a whole lot of people that the veteran speed metal act was back — following a two-year hiatus and wholesale lineup overhaul — but "United Abominations" makes the case a lot more convincingly out of the starting gate.

"Sleepwalker" has the feel and attack of classic MEGADETH, based on menacing, inventive riffs, galloping rhythms and an insidious vocal from frontman Dave Mustaine. Could it be that Mustaine, one of the genre's most provocative figures, has finally recaptured his band's original fire?

MEGADETH's eleventh studio outing doesn't quite reach the peaks of earlier milestones like "Rust In Peace" and "Peace Sells, But Who's Buying?" yet it's clearly the band's best effort since 1994's underrated "Youthanasia". Ironically, the least interesting track here is a remake of that album's "A Tout Le Monde" (subtitled "Set Me Free") which comes across as utterly pointless despite the presence of LACUNA COIL's Cristina Scabbia on additional vocals. But overall, "United Abominations" is an altogether heavier, more cohesive and aggressive affair than either "System" or 2001's "The World Need A Hero", and leaves radio-geared misfires like "Cryptic Writings" and "Risk" far in the dust.

"Washington Is Next" continues in the same hard-driving vein as "Sleepwalker", while "Never Walk Alone" has the kind of mid-paced tempo and intertwining riffs that could have easily landed the track on "Rust In Peace". The title track slows things down a bit but Mustaine's message is muddled in a too-confusing morass of spoken-word screeds and his own lyrics, which sacrifice melody so that he can jam in every point he wants to make.

The track does feature some excellent lead work, though, as does much of the disc, especially on those first three cuts and later tunes like "You're Dead" and the fiery album closer "Burnt Ice".

As for Dave's political views (and make no mistake, just like NINE INCH NAILS' "Year Zero" and MACHINE HEAD's "The Blackening", this is a political album),it's hard to exactly figure out what he's saying. On one hand he criticizes the United Nations for not getting behind the U.S. invasion of Iraq, but then turns around and refers to the U.S. as "a subsidiary of Halliburton," which sounds like something out of the RAGE AGAINST THE MACHINE playbook. His best line? "God vs. God, the undoing of man" — on this we agree, although I suspect for different reasons.

But also like those aforementioned albums, this is a record that can be enjoyed on purely musical terms. Not every song is a winner ("Play for Blood" and "Blessed be the Dead" are fairly generic),but this is the liveliest and heaviest MEGADETH outing in a long time. Not only is Mustaine in prime form, but guitarist Glen Drover especially comes into his own here, delivering a full share of the solos and getting into some electrifying lead duels with his boss. "United Abominations" is an unabashedly guitar-driven album, stuffed with riffs and leads coming from all directions. The sense of explosive instrumentation under precise control that was a hallmark of early MEGADETH efforts is back, which means that MEGADETH, in many ways, is back too.