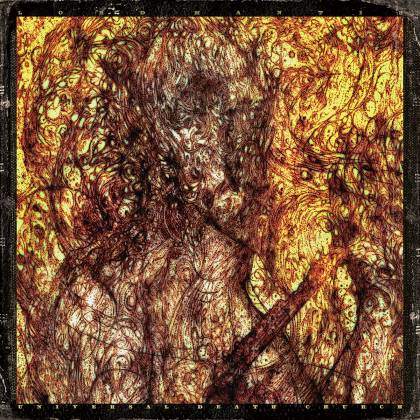 The musical nihilists known as LORD MANTIS were, by all accounts, considered a done deal in 2016. That's when founding member and percussionist Bill Bumgardner tragically committed suicide. But the unlikely and very much desired reunion came to fruition once vocalist/bassist Charlie Fell and guitarist/vocalist Andrew Markuszewski decided to rekindle their unsettling, ravaging musical fires. LORD MANTIS's musical track record has been utterly vile; it is a maelstrom of blackened sludge and doom that spits out hateful, menacing and depressive energy. New album "Universal Death Church" is everything LORD MANTIS fans would want and more.

This time around, the core duo of Charlie and Andrew is joined by new drummer Bryce Butler, "honorary" vocalist/member (whatever that means) Dylan O'Toole of INDIAN — who filled in for Charlie following his brief departure that predated the band's hiatus — and ABIGAIL WILLIAMS guitarist Ken Sorceron, who first appeared with LORD MANTIS five years ago on "Death Mask". Sure, the pedigree is impressive, but what's important is that the "who's who" list of underground stalwarts doesn't simply look good on paper. Whether it is in spite of or because of the barriers they had to overcome to churn out the album — including Bumgardner's untimely passing and the unit's internal quarreling — "Universal Death Church" is one of the best efforts of LORD MANTIS's career.

The band reaches dizzying and disgusting heights of musical malevolence on "Universal Death Church" collectively, but Charlie Fell's distinct, gut-wrenching screaming and howling returns to the fold and proves to be to be the most captivating aspect of all that's in the mix. CONTRARIAN's Bryce Butler exhibits a drumming style that doesn't necessarily mimic that of his predecessor, Bumgardner, but it naturally parallels it enough with a no-frills, steady and pummeling approach that's primal and minimalistic yet adorned with flashy and tasty percussive flourishes. He carries the malevolent vibe throughout the mid-paced banger "God's Animal", and Butler's excellence also shines through when he picks up the pace, like when he hammers away with aggression on "Santa Muerte", a track overflowing with belligerent blasts.

"Consciousness.exe", in stark contrast from the dingier blackened sludge that's characteristic of LORD MANTIS, is driven by a gripping guitar melody and groove that provides the kind of dynamic touch that prevents "Universal Death Church" from being too one-dimensional. "Low Entropy Narcosis", an effective and eerie interlude, provides additional dynamics in its own right. But "Fleshworld" proves to be the album's standout track. This song is overbearing in an overt sense, yet even at its most calm and lulling moments, it doles out an unyielding wave of ominous energy that's abundant with passion.

A reunion didn't seem to be a likely possibility considering the volatility and instability of the cast's characters, but the power of the riff has compelled them. And in spite of the literal death that tore the band apart before, LORD MANTIS has returned with an album that finds them as lively and relevant as ever. Their status within the scope of heavy music isn't likely to change with this new album, but for those who want to taste aggressive music with a different flavor, LORD MANTIS is what's for dinner.