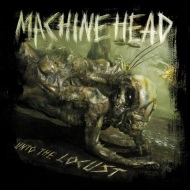 There's a reason MACHINE HEAD are one of the most talked about and successful bands in metal today. Very few have been able to take as many chances that paid off and even fewer have managed to evolve from album to album while never fully abandoning their roots. Much like METALLICA, MACHINE HEAD rose up out of the Bay Area like a beast and grabbed the metal world by the throat. And, also like METALLICA, our boys swapped out some of their thrashy aggression in favor of a more consumer-friendly sound. Core elements remained, but little else was the same. This is where the parallels end. When MACHINE HEAD made their "return to form" with "Through The Ashes Of Empires", shit got real. Ever since that ferocious mofo hit the streets, MACHINE HEAD hasn't looked back nor have they let up.

When "The Blackening" dropped four years ago, I immediately thought the band had released their "Master Of Puppets" This was one of the albums I would hand someone if they asked me what metal was. After spending some time with "Unto The Locust", I think I would hand that person a copy of each. Close examination of this album reveals very few flaws. That's not to say I fell in love with the disc from top to bottom, but, objectively speaking, MACHINE HEAD really nailed it here. Opener "I Am Hell (Sonata In C#)", an epic three-part tune, starts off with the a cappella "Sangre Sani", where Robb Flynn makes a rather surprising operatic debut. From there, the band kicks into the equally moody, but hella thick groove-fest "I Am Hell". The majority of the "sonata" is spent wailing through the speed-addled melodic thrasher "Ashes To The Sky". This song is made out of what has become MACHINE HEAD's staple since Phil Demmel joined the fray: furious riffs, angry-yet-catchy choruses and dynamic arrangement. I don't think they could have started this album off any better than they did. While the beginning of "Be Still And Know" reminded me a bit of a slowed down "Wasted Years", the rest of the tune is pure MACHINE HEAD. Slower than the previous tune, this song thrives on the interplay between Robb and Phil as it flows beneath Flynn's vocals. This song is one of the record's more memorable moments. "Locust" is one of piece of this puzzle that stirred mixed emotions within my fickle little soul. The first couple minutes of this one finds the band locked in this formulaic volley between a straight-forward, "Death Magnetic"-inspired section and a rather cool, melodic segment. This is a small gripe as the band wanders off into some very cool and progressive instrumental parts and rounds it all off with doses of massive groove. "This Is The End" and "Pearls Before The Swine" are both the sort of epic and intricate thrashers that MACHINE HEAD spoiled us with on their last two albums. The former is a more powerful song than the latter, but both tunes hit like a ten-ton hammer (pun intended). In what feels like a sort of continuation of "This Is The End", "Who We Are" closes "Unto The Locust" on a very strong note. Dynamic and diverse as anything the band has done, "Who We Are" offers a lot of emotion, pummel and hook for one song. The biggest downfall I found on this record was "Darkness Within". When set against the rest of the disc, this one just doesn't seem to fit and lacks the energy that surrounds it. I applaud Flynn's conviction for tossing this black sheep into the family, but felt like the song was a bit of momentum killer.

Where performance, songwriting, structure, production and sheer, stripped-down emotion and aggression are concerned, I'll put "Unto The Locust" up against any other album we've seen this year. This is the product of a band that knows exactly who they are as musicians and writes confidently and accordingly because of that fact. I have little doubt that MACHINE HEAD fans (and detractors, because some people have nothing else to do with their time) will dissect and over-analyze every note played on this album. They're wasting their time. "Unto The Locust" can be summarized in one word: badass.