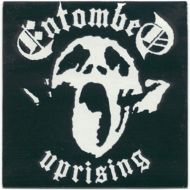 Heralded as a "return to form" for the Swedish quintet, ENTOMBED's latest is certainly a much rawer beast than the group's much-maligned Same Difference (1998) release, a consequence, no doubt, of the fact that the album was reportedly recorded over the course of eight days (four weekends)—a modern-day record for an established metal band. Devoid of the more experimental elements that made the last record such a "blasphemy" in the eyes of the group's fans, Uprising is also a far more straightforward affair, with punkish-sounding guitars and a total wall of sound completely obscuring anything that would otherwise remotely resemble a "song". Most of this can undoubtedly be attributed to vocalist L.G. Petrov, whose one-dimensional roar has never sounded as tiresome as it does here, and the "garage-y" sounding production (handled by the band and Nico Elgstrand at Das Boot Studios),which serves to strip the material of any dynamics, allowing it to stand its purest, barest form—exactly the end result the band had in mind for this album following the over-produced nature of its predecessor.

ENTOMBED's strongest point has always been their penchant for mixing old metal influences with plenty of hardcore and "stoner rock" overtones, and that combination has never been more successfully balanced than it is on this album. Ultimately, however, the limitations of the group's sound will stand firmly in the way of further commercial progress, and Uprising indicates that ENTOMBED's best days are well behind them.