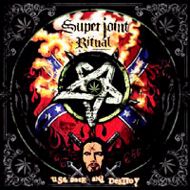 Use Once And Destroy

This long-anticipated project has probably been around nearly as long as PANTERA singer Philip Anselmo's better known "other" band, DOWN, and is in all likelihood the best-known of the many underground side projects that Anselmo has accumulated over the years. And credit is due for the fact that PANTERA, DOWN, and now SUPERJOINT RITUAL basically sound nothing alike — except for the fact that it's Anselmo's voice on all three.

SUPERJOINT is probably closer to PANTERA only in the sense that this is full-on metal as opposed to DOWN's retro/stoner/old school vibe. But whereas PANTERA albums have high production values and a certain major label sheen to them, Use Once And Destroy is all about rawness and noise. A mishmash of thrash/death/hardcore sounds, recorded with a minimum of finesse and a ton of crude energy, SUPERJOINT RITUAL may lack in truly impressive songwriting but excels as a 50-minute dose of pure, lethal metallic mayhem that frequently and accurately channels the late Eighties thrash scene.

On tunes like "Everyone Hates Everyone", "Antifaith", and "Drug Your Love", Anselmo's partner Jimmy Bower (playing guitar here, as opposed to his drumming duties in DOWN and C.O.C.) whips out a battery of riffs that recapture the feel of classic thrash yet are generic enough to not be associated with any individual band. In the end, however, what makes SUPERJOINT distinctive is the unmistakable roar of Anselmo, who screams his way into each song as if it was his last.

Not well-written enough to make its way into the upper echelons of classic underground thrash, Use Once And Destroy is nonetheless an intense, pure metal experience that fans of both PANTERA and classic thrash metal will no doubt enjoy. Kudos to Anselmo and Bower for keeping the flag flying.